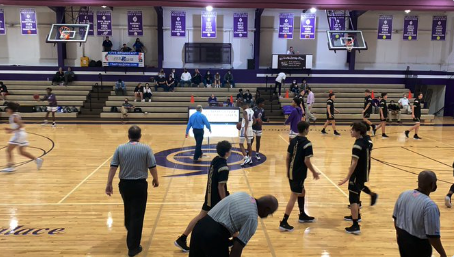 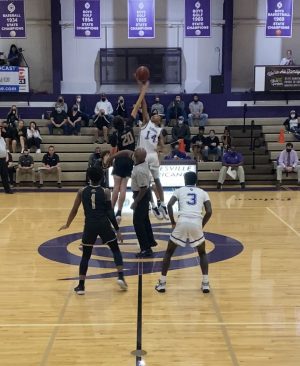 The Buchholz Bobcats fell to the Gainesville Hurricanes Tuesday night in the Quarterfinals of the 6A District 2 Boys Basketball Tournament by a score of 45-33.

This season has had many ups and downs for the Buchholz Boys Basketball team. The Bobcats finished with an 8-10 record following their loss Tuesday.

Buchholz had gained some momentum in the last few weeks, winning 5 of their last 6 games. However, they were unable to take down cross-town rival Gainesville on the road.

Back in November, Buchholz fired their longtime head coach Bob Horodyski. Horodyski had been with the program for 27 years but struggled last season with a 5-20 record. As a result, Athletic Director George Atohi took over as the new head coach heading into this season and was able to oversee immediate improvement.

Buchholz and Gainesville matched up twice early in the season. The first game resulted in a 64-56 win for the Hurricanes back in January. The second matchup, which took place a little over a week ago, resulted in a 65-61 victory for the Bobcats.

The rubber match Tuesday night had much larger implications. The winner would earn a trip to the District Semifinals.

Gainesville won the opening tip but looked sloppy early, wracking up 3 turnovers in the opening minutes. However, after scoring the first four points of the game, Buchholz failed to score for the remainder of the first quarter. The Bobcats found themselves down 9-4 at the conclusion of the first period of play.

The second quarter proved to be more of a battle between the two sides, who went back and forth down the court for most of the period. The quarter was highlighted by Gainesville’s Justus Wilburn and Buchholz’s Tyler Gainey. Wilburn took control in the second quarter, scoring half of his team’s second-quarter points himself. Gainey, on the other hand, used his quickness to snag several steals, including one steal in which he pickpocketed the Gainesville ball-handler and went all the way down the floor for an impressive breakaway layup.

At the half, Gainesville led Buchholz 17-13

The back and forth trend continued for most of the third quarter. Wilburn continued to dominate, adding another 6 points in the quarter. Following a Buchholz timeout, Gainesville went on an 8-0 run to end the quarter. The period was capped by a buzzer-beater 3 pointer by Gainesville’s Saladeen Westbrook.

Gainesville took a 33-20 lead into the final quarter.

Buchholz jumped out of the gate in the fourth quarter, forcing a turnover and then immediately hitting a three-pointer courtesy of Matthew Willenborg.

After a brief period of back and forth action, with multiple missed 3-pointers by each team, Buchholz’s Terrell Jackson converted an acrobatic layup to cut the deficit to 8. However, the Bobcats would fail to get any closer for the remainder of the game. An and-1 finish by Wilburn, followed by a Buchholz double dribble, squandered any momentum that the Bobcats had.

Buchholz had several opportunities to cut the lead late in the game. However, multiple missed close-range shots and several one-and-done possessions restricted any sort of comeback. Gainesville held on down the stretch to close out the victory, 45-33.

Gainesville advances to the 6A District 2 Boys Basketball Tournament Semifinals, where they will meet #1 Seed Columbia Wednesday evening in Tallahassee.