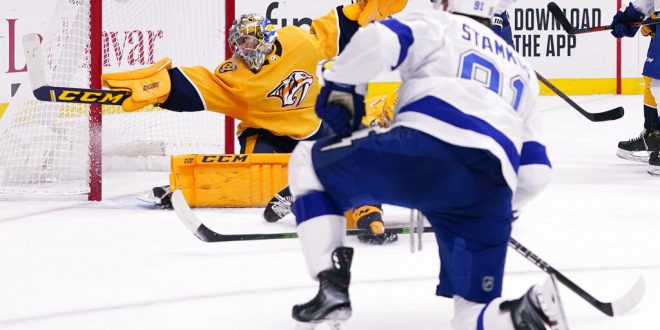 The Tampa Bay Lightning have continued their success from 2020 into 2021. The Lightning are first in the Central Division and second in all of the NHL.

In their six wins at home this season, the Lightning have beat their opponents by an average of 2.8 goals. They are undefeated at home despite playing in a tough division. Of the eight teams in the Central Division, seven made the playoffs in 2020.

Last season the Lightning had a win percentage at home of 64.7%.

Who are the difference makers?

Tampa Bay is without last year’s leading scorer Nikita Kucherov for the season. He started surgery for his hip at the turn of the year, general manager Julien BriseBrois announced in late December. BriseBrois hopes he can return for the playoffs to make a run at defending the Stanley Cup.

So far in this young season, Steven Stamkos and Brayden Point are leading the team with 14 points each. Stamkos has seven goals, Point has 10 assists.

Fifth-year defender Mikhail Sergachev leads the team with a plus/minus of 10. He also has nine assists on the season.

The Lightning as a whole have an NHL leading +22 scoring differential. They have scored 42 goals and allowed just 20. The next highest is the Montreal Canadiens with +17.

What is next for the Lightning?

The Lightning’s previous matchups against the Nashville Predators resulted in some high-scoring wins. In two games, they won by a combined 10-2.

FINAL: #Bolts sweep the back-to-back in Nashville with a 6-1 rout. Lightning have won 6 in a row and gained points in 7 straight. Tampa Bay records a season high for goals and limits its opponent to one goal for the 4th-straight contest. #TBLvsNSH

The next matchup is on Thursday and marks the start of a three-game series against the Florida Panthers. The Panthers are the second-best team in the Central Division sitting at a 7-1-2 record and are the number 12 team in ESPN’s power rankings.

Despite maintaining their wins, the Lightning have dropped down to 4th in the power rankings according to ESPN.

Jensen Young is a journalism student at the University of Florida. He works as a sports writer for WRUF.com and is the voice of trendings on Wednesday mornings on the WRUF radio station.
@Jensen_Young9
Previous Buchholz Boys Basketball Fall Short in District Quarterfinals
Next Heat Win Third Straight; Squeak by Knicks 98-96