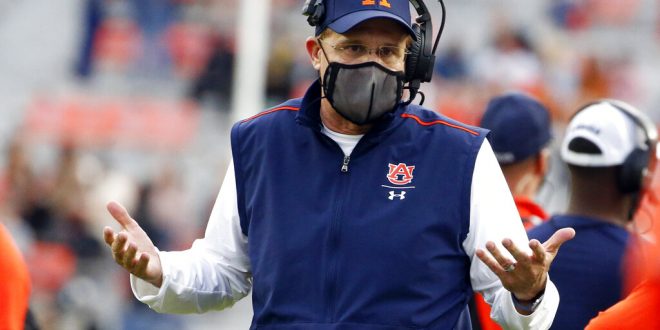 Gus Malzhan crowned the king of the UCF Knights

UCF football is about to get whole new look. The Knights are doing everything in their power to shake up college football once again.

Gus Malzahn spent the past six years coaching the Auburn Tigers. During his time, he led the Tigers to six-consecutive bowl appearances, two SEC West Division titles, an SEC Championship and an appearance in the BCS National Championship in 2013. Additionally, he won the Iron Bowl three times. After being released from Auburn in late last year, he has found a new home–University of Central Florida.

There was much speculation as to whether Auburn would part with Malzahn especially considering his winning record. Ultimately, the program sought new leadership.

“After evaluating the state of the Auburn football program, we’ve decided that it was time to make a change in leadership,” said Auburn athletic director Allen Greene in a statement.

Malzahn too is seeking a new challenge and where else than the University of Central Florida. UCF football has been a focal point of critique and analysis since it’s undefeated season in 2017. Eventually beating Malzahn and the Tigers in the 2018 Peach Bowl, the Knights have put themselves in the company of the Power Five Conferences. With two coaching changes since the infamous no-loss year, the Knights have now crowned Malzahn as head coach.

Malzahn was in consideration for the spot early since UCF also hired Terry Mohajir, who worked at Arkansas with Malzahn. Gus’ predecessor, Josh Huepel, went 28-8 overall leaving one of the more talented offenses in the AAC.

Gus Malzahn will be the next #UCF coach, sources told @aadelsonESPN, @ClowESPN and me. Deal should be finalized soon. Malzahn emerged as UCF's top target on Sunday. Yahoo first reported the hire by new athletic director Terry Mohajir. Malzahn, 55, is 77-38 in the FBS.

From the SEC to the AAC, Malzahn will be the first SEC head coach to take a stab at raising UCF into the Power Five. The Knights have wanted a chance to play with the Power 5 Conferences but has been unable to do so. Now, with a man who’s done it, UCF will look to not just with the AAC, but to smash the wall between them and the top conferences.