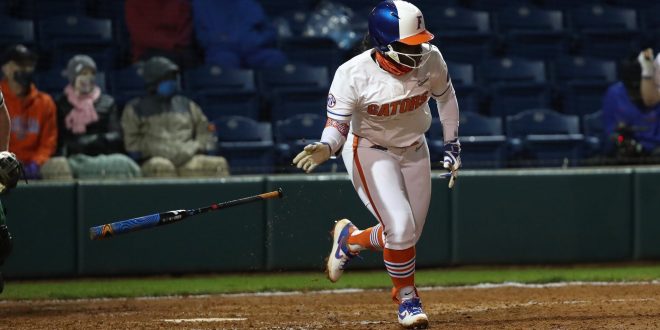 Charla Echols runs to first in the 2021 home opener against the Jacksonville Dolphins. Charla Echols began the season having statistically the best start by a Gator in program history in the batter's box. (PHOTO CREDIT: Tim Casey, UAA, @GatorsSB/Twitter)

The opening game of the Bubly Invitational started off slow for the Gator coach Tim Walton’s squad. For the first time in this young season, the Gators trailed. In the second inning, Bailee Wilson scored from first on a Shayla Smith bunt when Hannah Adams overthrew Charla Echols, allowing Wilson to score.

In his press conference following the midweek-win over Jacksonville University, Walton stressed he wanted his team to remain calm early on this season. In facing their first deficit, his team did just that.

There were still some struggles while the Gators got their gears turning. Florida left the bases loaded to end an inning yet again. That made it four times through four games that three runners have been stranded with no runs scored in the inning.

However, a two-out rally in the bottom of the fourth inning turned out to be crucial.

With Natalie Lugo finding her zone and limiting the Eagles to those two damaging hits, it was up to the Gator offense to wake up.

With Cheyenne Lindsey and Kali Reis occupying second and third with two outs in the bottom of the fourth, Hannah Adams did Hannah Adams things.

The senior, whose walk-off double beat Jacksonville on Wednesday, singled up the middle to put the Gators into the lead.

With the score ballooning to 5-1 in the bottom of the fourth, the Gators would never look back. Baylee Goddard added a two-run triple and Jaimie Hoover scored Goddard on a sacrifice fly.

Georgia Southern tried a late comeback, but the Gators came out on top 8-3.

Florida’s defense and pitching this season has been consistent and dominant. Natalie Lugo picked up her first win of the season with a complete game performance. Lugo struck out seven in the seven innings she pitched and gave up five hits and two earned runs.

Cheyenne Lindsey made another great catch in center field, as she did on Wednesday.

Unlike Wednesday’s game, Florida’s bats came alive. Baylee Goddard and Charla Echols both had extra-base hits, with Echols also hitting a triple. Hannah Adams continues to play strong picking up those two key RBI in the bottom of the fourth inning.

Echols’s contributions cannot be understated. She currently leads the SEC in batting average at .846 (11-13). She has a double, two triples, two home runs and nine RBI.

However, there are areas to improve. The Gators have left the bases loaded five times this season, including twice on Friday night. Tim Walton addressed the issue after Wednesday, saying he would not make any specific swing changes based on the scenario. Instead, the players need to find their groove and take it one at-bat at a time.

However, as the season goes on, Florida’s opposition will only get more intense. Missing opportunities by the wayside could come back to haunt them against teams like Alabama and LSU.

Regardless, a win is a win. Florida is 4-0 this season, with a chance to make it 6-0 Saturday.

The Gators play this same Georgia Southern side at 1 p.m. and then take on the Charlotte 49ers at 4 p.m. at Katie Seashole Pressly Stadium.

Originally from Seminole in the Tampa Bay area, Kyle is a contributor for ESPN Gainesville as well as local NPR and PBS affiliate WUFT. Kyle wants to get into sports with a lofty dream of being a sports broadcaster. He was raised playing soccer and baseball while watching hockey and football, so the knowledge about various sports is fairly extensive.
@KyleFanslerUF
Previous Mace, Hickey Lead Gators to Baseball Season Opening Win Over Miami
Next Handicapped No.1 Gator Gymnastics Top No.15 Wildcats