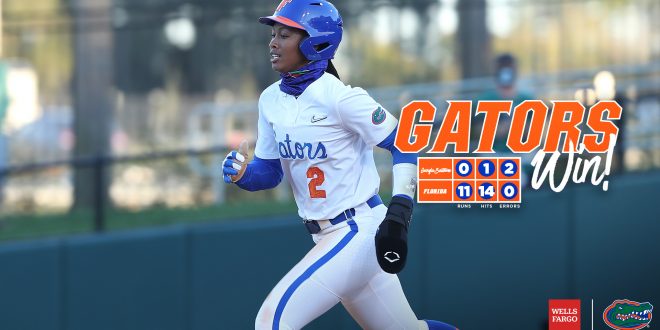 The sixth-ranked Gator softball team defeated the Charlotte 49ers 4-0 and the Georgia Southern Eagles 11-0 Sunday afternoon in the last two games of the Bubly Invitational. The Gators, moving to 8-0, cruised in the circle with Elizabeth Hightower and Katie Chronister combining to pitch 12 innings with no runs allowed throughout the two games.

Chronister Leads Gators in Game One

Katie Chronister pitched a complete game, three-hit shutout in the Gators’ first game of the Sunday doubleheader against the 3-4 49ers. Chronister threw a total of 96 pitches with six strikeouts, allowing her to capture her fourth win on the season.

.@KTChronister56 with career-highs in innings pitched (7.0 IP) and strikeouts (6) leads the #Gators past Charlotte‼️ #GoGators pic.twitter.com/VUfpo1g0uM

The Gators were able to jump out to an early 1-0 lead in the second inning after Jordan Matthews ripped a one-out RBI double to score Avery Goelz. The Gators struck again in the fourth inning, with Matthews hitting another RBI double. Later in the inning, Cheyenne Lindsey lined a run scoring double down the first baseline, and Hannah Adams perfectly executed a bunt to score Lindsey to extend the Gators lead to 4-0.

Chronister took it from there, shutting down the 49er offense, allowing the Gators to keep up their hot start to the season.

The Gator offense tallied 14 hits in Game Two of the team’s Sunday doubleheader against the 1-4 Eagles.

Julia Cottrill got the run-scoring started on a two run single with one out in the bottom of the first. The Gators would add on three more runs in the inning to go up 5-0 and they would extend their lead in the bottom of the third inning, with Charla Echols ripping a two-out two-run double down the left-field line to make it 7-0. Four more runs in the fourth inning allowed the Gators to blow the game open and cruise to an 11-0 win.

Lindsey went three for three with three doubles and three RBI to lead the team offensively. Kendyl Lindaman, Jaimie Hoover, Cottrill, and Adams each had two hits in the blow-out win over the Eagles.

Elizabeth Hightower started the game for the Gators in the circle in the second game and dominated the Georgia Southern hitters, allowing only one hit and striking out eight batters in five innings.

“We got some runs early in both games,” Gator head coach Tim Walton said. “Our hitters fed off of each other and did a really nice job. We hit all the way through the lineup it didn’t matter who you were.”

The Gators will next play Thursday against North Florida. The game is set to begin at 6 pm at home.