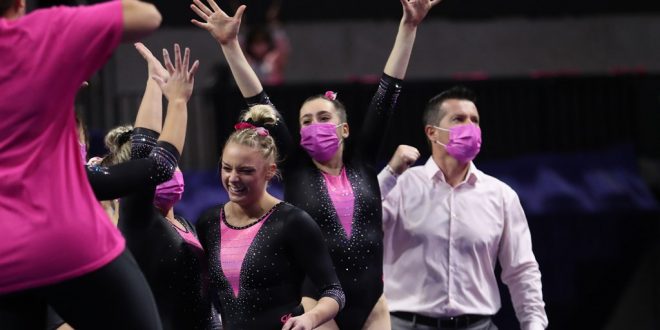 In their final meet of the season at the O’Connell Center, the No. 1 Florida Gators will face a familiar opponent: the team they started the year off against in week one, the No. 18 Auburn Tigers. In their second-consecutive meet at home, after a surprisingly great win over Kentucky, the Gators celebrate “Senior Night” for seniors Alyssa Baumann, Jazmyn Foberg, and Megan Skaggs.

“I hope people are scared of the Florida Gators because we’re pretty good.”- Senior Megan Skaggs

Since losing to the Gators at home in week one, the Tigers have had an up-and-down season. Following the opening meet, Auburn lost its’ next four meets in a row, all to SEC opponents including Kentucky, Alabama, LSU and Missouri. However, the team’s fortunes improved last week, as they secured their first win of the season over the Georgia Bulldogs in front of their home crowd. Now, the Tigers will be looking to shock the nation with yet another upset.

One gymnast that has stood out for Auburn is junior Derrian Gobourne. She will enter the meet against the Gators as the reigning SEC Specialist Gymnast of the Week, her second week with the award this season, and she will be hoping to replicate her performance on the bars from the previous week. Her score of 9.950 won her the event title and helped her team pull off the upset.

After being taken out of play due to COVID-19 protocols, juniors Sydney Johnson-Scharpf, Nya Reed, Savannah Schoenherr, and Trinity Thomas are all expected to be eligible to compete on Friday. While the gymnasts that filled in for the starters performed well, there will surely be some comfort and excitement for the team as they welcome back the returnees.

Also making her return is Head Coach Jenny Rowland, who was also unable to attend the meet due to COVID-19 protocols. After viewing the Kentucky meet at her home last Friday, she is eager to get back to being with her team.

“Who would think that everybody would be so excited to be normal,” Rowland said. “If anybody’s going to sit out, I hope it’s the coaching staff and not the student-athletes. My quarantine period is up, and I’m looking forward to a great weekend.”

Since the beginning of the season, the allure of a national title has been the elephant in the room for the Gators. Now, as they inch within weeks of postseason events, the topic is becoming discussed more and more. Senior Megan Skaggs has been vocal about the team’s aspirations, and how they have built confidence through them.

“I think our confidence collectively as a team is pretty high,” Skaggs said. “I think it’s higher than it’s been in the past because we’ve been really open with each other. We’re not afraid to say how good we are, and to say that we’re capable of winning a national championship.”

As Skaggs prepares for her final meet at home as a Florida Gator, that confidence is crucial. “Senior Night” is a landmark moment in any athlete’s career, so her experience and composure will hopefully help her stay calm amid the festivities.

“It‘s definitely in the back of your mind that you want to have a good night because it’s senior night,” Skaggs said. “I am very excited that it’s senior night but I’m also just trying to be in the moment and take every event, every moment of cheering with my teammates, every landing, just take it all in and enjoy every moment.”

Carson Cashion is a first-year student at the University of Florida, and has a major in journalism- sports and media. Originally from the Orlando area, Cashion covers the UF Gymnastics Team, having formerly covered Oak Hall Sports.
Previous Gators Softball overpowers UNF
Next Pat Dooley’s Front Nine: February 26