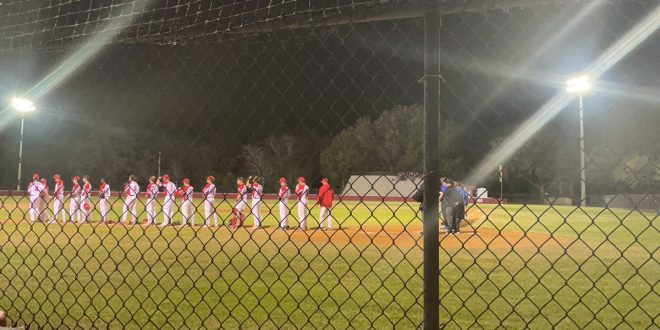 The Newberry High School baseball team has started its season strong, with a 5-0 record in the 2021 season. The team has faced West Port, Bell, Seven Rivers, Chiefland, and Williston with strong wins in all five games. The Panthers entered the 2021 season with six seniors on the roster: Caden Massey, James Turner, Makai Johnson, Luke Ridley, Justen Crews, and Dylan Schaffer.

Makai Johnson, a shortstop in the Class of 2021, recently committed to Tallahassee Community College.

The Newberry Panthers took on the Williston Red Devils, the 2019 Class 1A FHSAA state champions, on Tuesday evening.  The Panthers were easily heard from the dugout all throughout the game. However, it wasn’t until the third  inning that the Panthers got on the scoreboard.

Pitcher Dylan Schaffer had a great night and was named Player of the Game. Schaffer pitched 6 and ⅔ innings with a total of 15 strikeouts and he didn’t allow a hit.

Offensively, Justen Crews led off the top of the third inning with a walk, which led to a two run inning for the Panthers. Crews showed out well on the night, going 2 for 3 at the plate with an RBI.

Lighting Up the Scoreboard

It wasn’t until the sixth inning that the Panthers started to put the pressure on Williston High.  Caden Massey earned himself a walk at the top of the inning. James Turner hit an RBI double, bringing Massey home.

Luke Ridley hit an RBI double bringing in two runners and extending the lead to 6-0.

Jonathan Moore stole third base early on in the top of the seventh inning with no outs for the Panthers. An RBI from James Turner brought Moore home. The Panthers led 7-0 against the Red Devils.  Makai Johnson concluded Newberry’s performance with an RBI double to bring Turner home.

Three seniors on the Newberry team had two RBIs in this game: Makai Johnson, Luke Ridley, and James Turner as the Panthers rolled 9-0.

What’s Next for Newberry

The Panthers will take on Wildwood on Thursday, March 4th at 6:30 p.m.