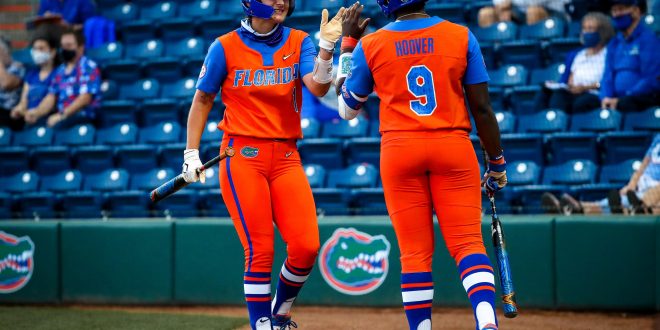 A perfect start to the season is exactly what Florida head coach Tim Walton looked for just under a month ago. Now sitting at 12-0 as the number-five team in the country, Gator softball welcomes New Mexico State to Katie Seashole Pressly Stadium for a mid week matchup on Wednesday.

One struggle for any team to start their season is finding their groove. Florida played some close games this season, particularly against Jacksonville, Georgia Southern and McNeese State. At first glance, these might not seem like the most daunting opponents. That’s fair, Florida has yet to play a ranked team this season, but it is hard to argue with a perfect 12 wins out of 12 games.

The one consistency with those three games is Hannah Adams. On two of those occasions, the senior second baseman delivered the game-winning hit. In the other, she represented the game-winning run. Adams embodies the dominance demonstrated by the top of Florida’s lineup.

Including Cheyenne Lindsey, who usually bats in the nine-hole as what Tim Walton calls a “second leadoff hitter”, the Gators carry four-straight crucial and consistent batters. Lindsey, Adams, Kendyl Lindaman and Charla Echols deliver a daunting task for the opposing pitchers. Those four batters currently have a combined 58 hits and 42 RBIs.

This is not to say Florida’s other batters have been lacking. As a team, the Gators currently have a batting average of .325, good for 12th in the nation. While Hannah Adams and Cheyenne Lindsey both have seven doubles, the Gators roster has 23 doubles to go along with four triples and six home runs.

While the performances in the batter’s box has been stellar, this Gators team would not be where they are without their pitching. While no Gators pitcher has been ‘perfect’, they have been about as close as you can get to the word in softball.

The four Gators who appeared in the circle thus far are lights out. The star thus far is Katie Chronister. The fifth-year Gainesville-native currently holds an ERA of 0.00. Through her five appearances, Chronister yielded seven hits for an opposing batting average of .095. She earned SEC pitcher of the Week in the second week of the season for her dominance.

While Chronister holds the headlines, the performances of the other three pitchers cannot be understated.

Rylee Trlicek has been close to perfect in her three appearances, also holding an ERA of 0.00. Elizabeth Hightower and Natalie Lugo are undefeated this season, combining for 50 strikeouts and the other seven wins for Tim Walton’s Gators.

Next up on the plate for Florida are the New Mexico State University Aggies. This could certainly be a trap game. Florida played teams below their talent level close, and a weekend series against rival FSU is only two days after this midweek-matchup.

New Mexico State has struggled this year. The Aggies sit at 3-9, recently going 2-3 in The Spring Games in Clermont. Unlike the Gators, NMSU played a ranked opponent this year, getting run-ruled twice by number 12 Kentucky on back-to-back days.

If one of the Gators strengths is consistent hitting across the board, that may be where the Aggies struggle. They have only scored more than five runs once, compared to a Florida team that has done so five times. The Aggies only bat .218 as a team, led by Hailey Tonori (.361) and Matalasi Faapito (.310).

This game lacks glamour, but it is a significant game for Florida. If the Gators overlook this game with number 16 Florida State coming up, it could cause trouble for Tim Walton.

Originally from Seminole in the Tampa Bay area, Kyle is a contributor for ESPN Gainesville as well as local NPR and PBS affiliate WUFT. Kyle wants to get into sports with a lofty dream of being a sports broadcaster. He was raised playing soccer and baseball while watching hockey and football, so the knowledge about various sports is fairly extensive.
@KyleFanslerUF
Previous No. 8 Alabama Men’s Basketball Battles Rival Auburn
Next Newberry Baseball Extends 2021 Season Record to 5-0