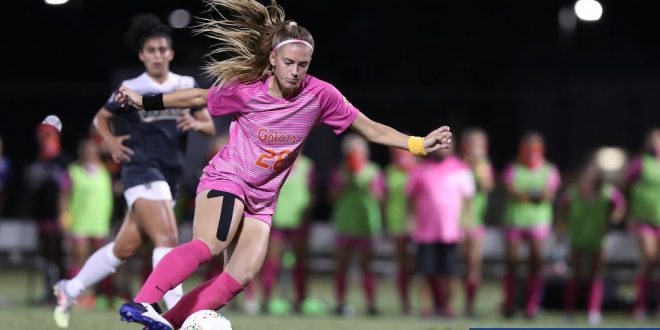 FSU is ranked number one on TopDrawerSoccer.com. The series between these two schools is split 13-13 so this Saturday will be the decider.

This will be the first game for FSU since the fall season of conference play.

Florida battled the No. 18 team in the country, South Florida to a 0-0 tie in double overtime. It was senior night so the emotions were running high on the field and in the stands.

The Gators battled against the aggressive attack of USF and were able to pursue their opportunities on offense as well. Florida even played a player down when Cameron Hall received a red card in the 73′ min. Although there was no score, the game was competitive and engulfed with excitement. A total of 38 fouls were called during the match, showing the bad blood between these two teams. Especially since the last time these two met, USF knocked Florida out of the NCAA tournament.

It was a standout performance for the Gators Senior Madison Alexander who put up three shots with one on goal. Nicole Vernis was another three shot player for Florida and she was very active throughout the field. Also, the match is not nearly as exciting without Susi Espinoza, the senior goalkeeper, making three huge saves for the Gators.

Rain is to be expected. The Florida Gators baseball game had a series scheduled vs FAMU this weekend and recently changed Friday nights game to a double header because of the weather expected on Saturday. But this is soccer, the field conditions have a little more lenience.

Expect a talented team. The Noles shot 189 shots in 11 matches, scoring just over three goals a contest. In a tough ACC schedule where they beat five ranked teams and defeated the powerhouse UNC team run by Anson Dorrance IV in the ACC championship.

Yet, UF is playing passionately these days. With new additions from Fall and Becky Burleigh’s final season as coach, Florida has been leaving it all on the field and playing with a lot of heart and charisma.