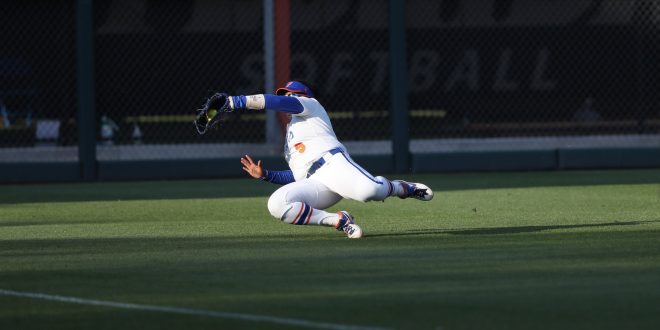 With two outs in the bottom of the fifth inning, Florida softball player Kendyl Lindaman got a rising fastball and hit a high fly ball over the leftfield fence. With two runners on base, Lindaman’s three-run home run extended the Gator lead to 4-0 in the bottom of the fifth. Although Elizabeth Hightower kept Florida State off the board in the circle, Lindaman’s home run gave the Gators important insurance runs to help the team outlast the Seminoles 5-0.

“It felt great,” Lindaman said. “We needed more insurance runs and our pitchers have been dealing every single day. Just giving them the confidence as well as our hitters and I just wanted to make sure we had enough insurance runs to win tonight.”

Elizabeth Hightower shined in the circle once again for the Gators. Despite walking three batters, Hightower battled and gave up only one hit to the 10-4 Seminoles while striking out three batters.

Hightower ran into trouble in the top of the sixth inning, hitting a Florida State batter and giving up the only Seminole hit of the day. A double steal from the Seminoles set them up with second and third with two outs in the inning. On the next play, Jaimie Hoover came running in from left field to make a sliding catch, getting the Gators out of the jam.

Hightower would go on and pitch a scoreless seventh inning, earning her seventh win of the season for the now 14-0 Gators. Being from Tallahassee, pitching a shutout was very emotional for Hightower.

“Just being from around that area, that was a big game for me,” Hightower said. “It was really fun the whole time and that was a big part of my season. Just having the defense behind me work like they did took a lot of pressure off me.”

After three scoreless innings from both sides, the Gators struck the scoreboard first in the bottom of the fourth inning. Charla Echols crushed a monster home run to right field, almost landing on Museum Drive, putting the Gators out in front 1-0. In the fifth inning, the home run from Lindaman extended the Gators lead to 4-0.

The team was able to add another insurance run in the bottom of the sixth. With the bases loaded and two outs, Cheyenne Lindsey drove Mia Buffano in from third base on a single to center field, pushing the Gator lead to 5-0. Jaimie Hoover tried to score on the same play but was gunned down at home by the center fielder, ending the inning. The 5-0 Gator lead would stand for the rest of the game, as Hightower closed the game out in the top of the seventh inning.

“Kendyl Lindaman obviously scorched that ball,” Gator head coach Tim Walton said. “I was really proud of the way that we just grinded it out and put some good swings on the ball. I thought we did a good job capitalizing when we had the opportunities.”

The Gators will travel to Tallahassee Saturday for the final game of the two-game series against the Seminoles. The game is slated to begin at 6 pm.