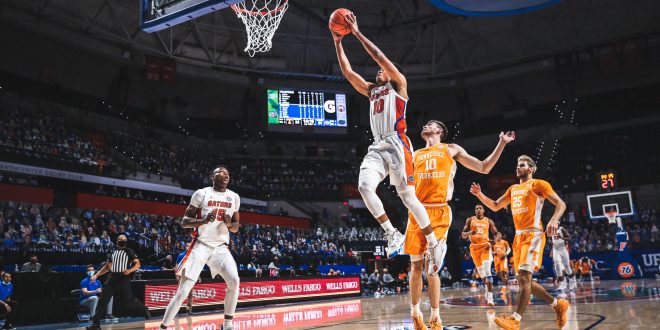 The Florida men’s basketball team ends its regular season Saturday when it goes on the road to face the Tennessee Volunteers.

The Gators were on bit of a hot streak earning wins over Georgia, Auburn and Kentucky but that streak came to an end earlier in the week as they took a tough loss to the Missouri Tigers. The Tigers defeated Florida with a late game lay up Dru Smith  by a 68-66 score.

Back on January 27 the Gators hosted the Vols in the O’Connell Center where they defeated Tennessee 75-49. Florida stood out during that game landing four players in double figure scoring.  The Volunteers at the time were ranked in the top 10 and since that time have dropped out of the national rankings because of a recent slide of their own.

Sophomore Tre Mann currently leads the Gators in scoring averaging 15 points a game and he has played very well of late, scoring and also rebounding well.  He’s averaged over 20 points a game in his last three outings and he was named the SEC Player of the Week.

Tennessee enters this game coming off a 77-72 road loss at Auburn.  The Vols are led by Jaden Springer who’s averaging 12.8 points per contest. It will also be Senior Day for the team as they send off seniors E.J Anosike, Yves Pons, and John Fulkerson.

Tip off between these two SEC teams is set for Sunday at noon in Knoxville.  This game will be very important in determining seeding for the upcoming SEC Tournament.   Going into the final weekend of play, Florida is 9-6 in the SEC while the Vols are 9-7.  LSU is 10-6 and Missouri is 8-7 so depending on the outcomes of some of the other games involving those teams, we could see a real shuffle in the SEC regular season standings heading into the conference tournament.