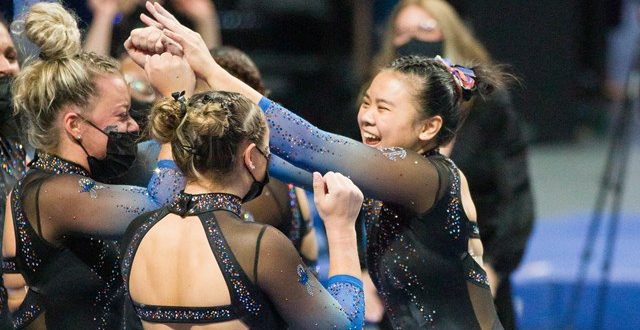 In the final meet of the regular season, the top ranked Florida gymnastics team traveled to Tuscaloosa to take on the sixth ranked Alabama Crimson Tide. The meet would decide if Florida would be the sole champion of the SEC for regular season play, or if it would share the title with Alabama. About a half hour before the meet began, the team’s Twitter account announced unfortunate news; junior and reigning SEC Gymnast of the Week Trinity Thomas would not compete due to an ankle injury suffered in warm ups. However, the Gators would rally together and pull out a win on the road, defeating Alabama 197.425-197.225.

Opening the meet on the bars, the loss of Thomas seemed to rattle the team; freshman Gabrielle Gallentine filled the hole that Thomas left in the lineup, but the team still performed below their standard of excellence. Florida opened the rotation with two scores below 9.800, and Alyssa Baumann stumbled on her landing, dropping her score to a 9.200. Despite these uncharacteristic performances, there were still bright spots. Veteran leadership proved beneficial, as senior Megan Skaggs earned a 9.900, and junior Savannah Schoenherr scored a 9.925. After the first rotation, the Gators found themselves in the rare position of trailing by a score of 49.300-49.075.

Entering the second rotation, the Gators needed to claw back into the meet with their vault routines. Needing some consistency after a rocky opening rotation, the team found it. Senior Jazmyn Foberg opened the lineup with a 9.850, and freshman Ellie Lazzari followed that score with a 9.900. Skaggs, as well as junior Nya Reed, both matched Lazzari’s score, but it was Alabama sophomore Luisa Blanco who led the meet. Her scores of 9.950 and 9.925 on the bars and vault, respectively, won her the event title for both events. While Florida did make up ground in the second rotation, they still trailed in the meet.

After trailing for the first two rotations, the Gators finally took hold of the meet in the third rotation. Opening the team’s floor exercises, Skaggs and junior Sydney Johnson-Scharpf both earned 9.850s. This performance was Johnson-Scharpf’s first performance since leaving the floor lineup due to a hip injury. Following them was Lazzari, who continued her hot streak with a score of 9.900. Reed, a staple of the Gators’ floor routines, earned a 9.950, and Baumann rebounded from her beams error by leading the way for the Gators. Her score of 9.975, tying her career high, officially catapulted Florida into the lead of this meet, as the Gators held a narrow .05 lead over the Crimson Tide. Baumann’s score would earn her a share of the event title with Alabama senior Lexi Graber. The final rotation would prove to be critical.

The floor exercise is the only event that the Crimson Tide does not hold a top-seven spot in the nation for and this became evident in the fourth rotation, as Alabama couldn’t register a score of 9.800 or higher from their first three gymnasts. In contrast, the Gators let their nation-leading beam routine bring the meet home. Sophomore Payton Richards opened the rotation with a 9.875. Skaggs clinched a share of her first event title of the night with her score of 9.925 (Blanco also earned this score for the Tide.) Lazzari finished her night strong with yet another 9.900, and 9.850 scores from both Baumann and junior Leah Clapper clinched the Gator win. Schoenherr’s score of 9.875 was unneeded, but capped off a chaotic, yet successful, night of Gator gymnastics.

With the win, the Gators become the sole champions of the regular season for the SEC. The Gators also clinch their second-consecutive perfect season of SEC play. Now, the team enters the SEC Championship as the one seed; the meet in Huntsville, Alabama, will take place on Saturday, March 20.

Carson Cashion is a second-year student at the University of Florida, and has a major in journalism with a specialization in sports and media. Originally from the Orlando area, Cashion has covered the UF Gymnastics team as well as Oak Hall athletics for ESPN Gainesville.
Previous Florida Volleyball Defeats Arkansas 3-0 Series Opener
Next Gators Men’s Hoops heads to Knoxville to Face Volunteers