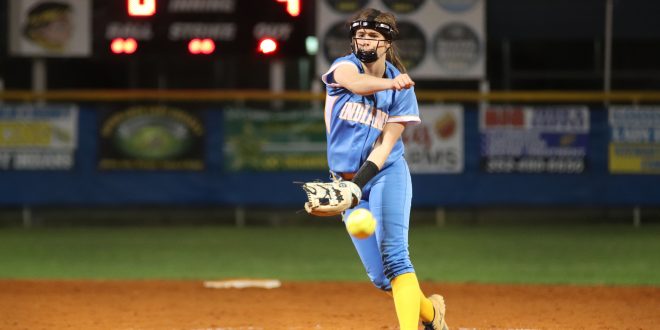 Pitcher Kaley Osteen throws a ball at the top of the second inning. (photo by Faith Buckley)

Last Thursday night the Chiefland Indians dropped their fourth game in a row in softball, losing 13-5 to the Buchholz. Bobcats.

The Indians have had a bad recurring theme in their last four games; they have lacked consistency with their pitching and defense over this losing streak. The Indians have very strong innings through these games, but sometimes they have given up runs in bunches, leading to some losses.

With that being said this season has only just begun and the Indians were facing an uphill battle before the game began. The season faces an ugly truth, Covid-19 can change the course of any game and any season and the Indians have felt that presence recently.

The Indians had to bring up three middle school softball players for the Buchholz game.  They brought up a center fielder named Mckenzy Fisher, and two new bench bat sisters Emma and Amber Campbell. Without these young girls, the team would have had to forfeit this game and or postpone the game for a later date.

They were missing two of their starting players in sophmore Shanee Keene and junior Ashari Bowers. These are two big names for the Indians and the hope is they will return soon.

The Indians came out fast and strong in the first inning. Starting pitcher Kaylee Osteen sat Buchholz down one-two-three. The ladies were pumped after a strong top half of the inning and they continued their success into the bottom of the first.

Senior Kate Weeks started the inning off with a loud PING!!! shooting a double over the centerfielder’s head.  The next four batters got on base with either a free pass or a fielder’s choice. The Indians needed a big hit there were two outs and the bases were juiced.

“The Buchholz pitcher was very consistent of where she was placing her strikes on our batters. I saw this with the teammates before me and I just took advantage of that knowledge.” This comes from the player of the game on the Chiefland side Devin Ellis. She went 2 for 4 on the day ripping two doubles to the gap and getting on base a third time with a fielder’s choice. She opened up the night with a two-run double in the bottom of the first.

The team scored four runs in the bottom of the first, a great start but the lead would not last.  In the top of the third, Buchholz scored five runs as a mixture of good hits, walks and errors were a dagger in the game. Chiefland was never able to recover from this and eventually the Bobcats tacked on more runs to get the win.

When asking Ellis what the team can improve on she was very simple in her answer.

“We need to set personal goals for ourselves. Once we have what we are striving to do the team will come around,” she said.

The Indians have a tough game against the undefeated Dixie County Bears. The team is looking to bounce back and to go show the other teams what they can do.