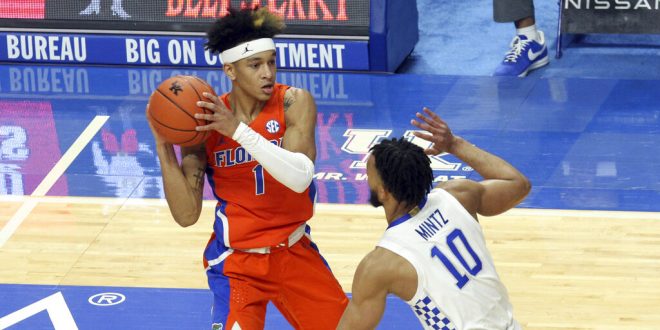 Florida's Tre Mann, left, looks for an opening on Kentucky's Davion Mintz (10) during the first half of an NCAA college basketball game in Lexington, Ky., Saturday, Feb. 27, 2021. (AP Photo/James Crisp)

The Southeastern Conference has announced it’s first and second-team honors for the 2021 season. Gators sophomore guard Tre Mann was named to the first-team and junior center Colin Castleton was listed second-team.

The conference also unveiled it’s All-Freshman and All-Defensive lists, although no Gators were honored.

For Mann, it’s been quite the improvement since last season. After averaging just 5.3 points and 0.7 assists per game a year ago, Mann now averages 15 points and 3.4 assists per game this season. His point per game average leads the team and ranks 11th in the SEC. It’s the highest mark by a Gator since Jalen Hudson averaged 15.5 points per game in 2018.

This the second consecutive year a Gator made the first-team list as star forward Keyonte Johnson was honored in 2020.

Mann’s value to the team is a big reason why he was honored. Mann missed Sunday’s game against Tennessee with a migraine. His absence made his importance quite clear.

In the loss, Florida scored a season-low 54 points — their lowest point total since November 2019 against FSU.

An indispensable piece of the team, Mann was a well deserving candidate for the honor.

Castleton, a junior forward from Deland, Fla., transferred from Michigan in April 2020. Since arriving in Gainesville, he’s made an immediate impact on the team. He has more than filled the void left by center Kerry Blackshear. His tandem with sophomore big man Omar Payne has proved quite serviceable for the Gators this season.

Castleton is second on the team in scoring with 12.7 points per game. He is tied with Mann for the team-lead in rebounds at 5.7 per game.

Will Levenson is a Journalism and Sports Media major at UF. He produces daily shows for WRUF, including "Sport Scene with Steve Russell," "Harp on Sports," and "The Tailgate." In addition, Will provides weekly sports updates for WUFT News and radio Sportscenters for WRUF radio. Will has been a writer at ESPN Gainesville since September 2019.
@BigWillLevenson
Previous Seattle Seahawks Release Former Gator Carlos Dunlap
Next Outfielder Jackie Bradley Jr. Joins Milwaukee Brewers