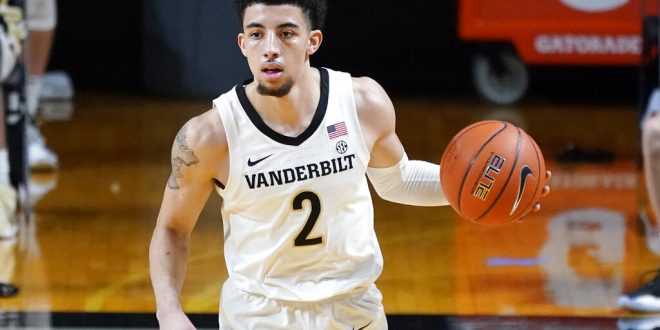 When both teams take the court tonight, it will be the 15th meeting between the two competitors. Vanderbilt leads the series 8-6, but the Aggies have won the last four meetings. The teams have met twice in the SEC Tournament, splitting the outcome 1-1, with Texas A&M winning last time 69-52 in 2019.

The Aggies lost their last game of the season against Arkansas 87-80, finishing off their season with an (8-9, 2-8) record.

Sophomore forward Emanuel Miller should be a prime focus for the Aggies offensive game plan. Miller has scored in double figures in 13 of the 16 games he has played and recorded a double-double in six of his matchups. He is averaging 15.9 points this season and 8.2 rebounds, leading the SEC with a 56.0  field goal percentage.

He has great size at 6’7. It helps get free throw opportunities as he is foul shooting or driving towards the basket.

The Aggies should also look to senior guard Savion Flagg who has averaged 14.8 points per game in their last four games. Flagg is ranked ninth in assists this season in the SEC and third in rebounds.

He could help the team tonight by finding open players to score and help on the defensive side by collecting rebounds, making a possibility for fast breaks. In addition, sophomore guard Andre Gordon leads the team in assists with 44.

On the defensive end, the Aggies should look to senior guard Quenton Jackson to play lockdown defense as he led the team with 21 steals this season. Jackson is also the second-leading scorer on the team with 10.5 points per game, which can significantly contribute to the offensive play. He scored 23 points and five 3-pointers in their last regular-season game against Arkansas.

The team also should look to draw charges as the Commodores attempt to score in the paint since the team has drawn 24 charges this season. If the Aggies can perform well on the offensive and defensive side of the ball, they should be able to punch their ticket into the tournament’s second round.

The Commodores‘ regular-season finale didn’t go as planned as they lost to Ole Miss 56-46, ending the season with an (8-15, 3-13) record. As Vanderbilt enters the tournament, they will look to turn things around as they hadn’t won in the tournament since 2017, when they defeated Texas A&M.

The team should lean on sophomore guard Scotty Pippen Jr. offensively. He is second in the SEC with 20.6 points per game and 4.9 assists per game.

Pippen Jr. could open the floor up for the team with his vision on the court, finding shooters in open positions to lead to a score. He can also create shots for himself and find opening lanes to finish for the easy bucket against opponents, which can be a key factor against the Aggies.

Sophomore guard Jordan Wright and Senior guard Maxwell Evans should be pivotal contributors to the offense alongside Pippen Jr. as they look to get baskets inside and outside the paint.

Wright has had five straight games with double figures this season. If he can put on a double-digit performance tonight, that would greatly help his team. The team should also look to get great production from its bench with scoring and rebounding during the game.

Fifth-year senior Clevon Brown should be a significant factor on the court’s defensive end, especially in the paint, as he had 125 blocks in his career at Vanderbilt. Brown should look to play lockdown defense as the Aggie has a strong offensive attack with young sophomore guard Emanuel Miller.

The Commodores will be missing a big piece to their offensive and defensive game as Sophomore forward Dylan Disu injured his knee during the season, leading to him being out for the season. Disu was averaging a double-double with 17.4 points per game and 11.4 rebounds per game. Pippen and Disu both received honors from the SEC.

A pair of honors for @spippenjr and the @SEC Scholar-Athlete of the Year award goes to @DylanDisu. #StackhouseEra | #AnchorDown https://t.co/DtklMR8RwI

Disu presence will be missed, but if the team can perform well on both ends of the court and hold Texas A&M to a lower scoring game, they could be advancing to the next round of the SEC tournament.

The second round of the SEC Tournament will have four games set to play on Thursday. The first game starts at noon when Kentucky takes on Mississippi State.

The winner of tonight’s game between the Aggies and Commodores will take on the Florida Gators at 2:30 p.m. Later in the evening, there will be two more games to finish off the night with Georgia vs. Missouri at 7 p.m. and South Carolina vs. Ole Miss at 9 p.m.