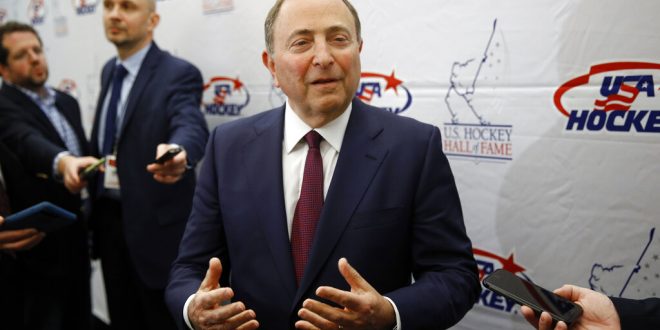 FILE - NHL Commissioner Gary Bettman speaks with members of the media before being inducted into the U.S. Hockey Hall of Fame in Washington, in this Thursday, Dec. 12, 2019, file photo. Like the NBA, the NHL is going forward with a season without a bubble. Commissioner Gary Bettman, Players' Association executive director Don Fehr and other top officials explain how hockey got to this point with a CBA that may have only staved off headaches and playing in mostly empty home arenas to start. (AP Photo/Patrick Semansky, File)

Beginning next season, a new agreement will bring the NHL back to ESPN in a broadcasting deal announced on Wednesday.

Workings of the deal

The last time ESPN broadcast an NHL game was way back in 2004. That same year, the Tampa Bay Lightning claimed their first Stanley Cup. In 2021, we will see an NHL on ESPN broadcast again.

On its face, ESPN and the NHL reached a seven-year deal to expire after the 2027-28 NHL Season. Among notable facts about the agreement, ESPN and ABC will broadcast 25 regular-season games, games in the early rounds of the playoffs, and one of two conference finals each year. Over the seven years, ABC will broadcast four Stanley Cup Finals.

The last Stanley Cup Final aired on the Disney family of networks was in 2004, when the Tampa Bay Lightning defeated the Calgary Flames in seven games.

This deal comes after the conclusion between NBC and the NHL’s contract which lasted 10 years.

Vic Morren started working for ESPN in 2004, and has been a contributor for their hockey programming since then. He says ESPN made its presence felt knowing about NBC’s expiring arrangement.

In total, the deal has an estimated value of $2.8 billion, according to Andrew Marchand of the New York Post. For reference, that is $400 million per year if Marchand is correct.

Also, worth note, the NHL on ESPN theme is coming back, too.

One of the main points of significance is that this is a multiplatform deal. This goes beyond the regular season and playoff games aired specifically on ESPN and ABC.

Instead, the growth of ESPN+, Hulu and Disney+ made this deal that much more lucrative. More than 1,000 NHL games will be able to be streamed per season, and 75 games will be ESPN-produced exclusive games.

This trend is no surprise. The NFL is leading the movement to an increasing presence in the streaming realm. Their agreements with Amazon Prime to air Thursday Night Football could soon be exclusive.

Streaming is rapidly becoming the main form of consuming media, replacing cable and satellite TV. Morren sees this trend seeping into and taking over the sports world.

NHL.tv, the out-of-market viewing platform in the NHL will also be coming over to ESPN+ in this deal. The NHL All-Star Game, Skills Competition, Opening Night matchups and other “special events” will follow suit.

We still have some time before ESPN’s broadcasting of NHL resumes. Presently, the Tampa Bay Lightning occupy the top spot in the NHL’s Central Division, boasting the best record in the league. Undoubtedly, this is an impressive first 24 games for a defending Stanley Cup Champion. Regardless, the Lightning are adamant that this is a different team than last year.

We own it. ⚡️ pic.twitter.com/HJv1PeR35T

Video production aside, this team is still the team to beat, says Vic Morren.

Keeping this Lightning team together could be challenging considering another cap crunch is on the horizon. But, let’s say they can. It would certainly be something for the Lightning to participate in consecutive Stanley Cup Finals on ABC 18 years apart.

Originally from Seminole in the Tampa Bay area, Kyle is a contributor for ESPN Gainesville as well as local NPR and PBS affiliate WUFT. Kyle wants to get into sports with a lofty dream of being a sports broadcaster. He was raised playing soccer and baseball while watching hockey and football, so the knowledge about various sports is fairly extensive.
@KyleFanslerUF
Previous Becky Burleigh’s Goodbye and a Florida Gators Win
Next Gator Softball Hosts No. 9 Kentucky in First SEC Showdown of the Season