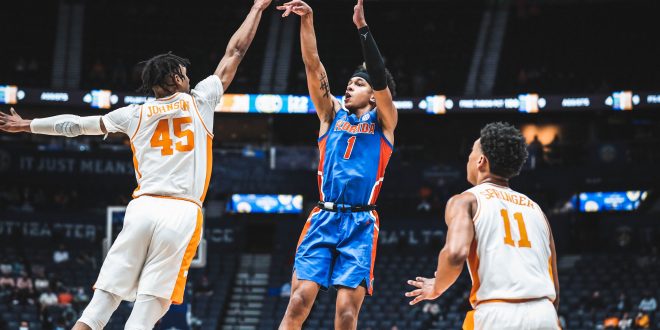 Gators Men’s basketball battled it out with Tennessee in the quarterfinals of the SEC Men’s Basketball tournament.

Florida met with Volunteers for what should be that last meeting of the season between these two teams.

Florida started the game off slow, only having a total of 10 points through 12 minutes. As the Gators ended the first half, they trailed behind Tennessee 31-22. Tyree Appleby led the Gators with only six points for the half.

Florida Omar Payne was called for a flagrant foul. The referees labeled an intentional elbow to the head of Tennessee forward Jon Fulkerson. Payne was ejected from the game and left with a Flagrant-2 foul.

Next up for the Gators

Tennessee entered this match up with a win over Florida making it their second time beating the Gators within the week. The Volunteers saw the floor on Sunday in Knoxville, defeating Florida 65-54.

Santiago Vescovi led Tennessee in scoring for the game with 14 points and five assists. The Volunteers manage to have five players in double-figures for the game. Tennessee advances to the semifinals and will take on the No. 1 seed in the SEC tournament, Alabama.