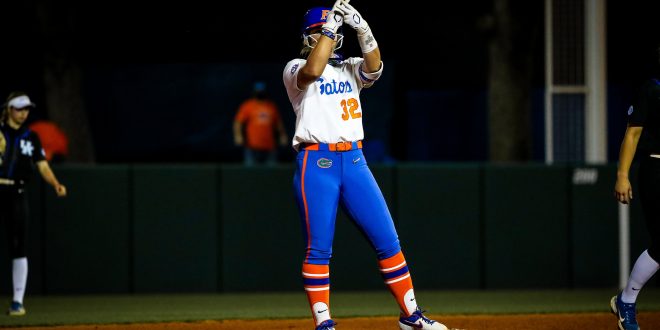 Kendyl Lindaman celebrates her double against Kentucky in the Gators' victory over Kentucky. Lindaman's two-run double in the fourth inning proved to be the difference maker as the Gators won 3-1 in their SEC opener. (Photo Credit: @GatorsSB / Twitter)

Kendyl Lindaman faced nine pitches in the at-bat. Florida’s designated player turned on a pitch and carried a pop fly all the way to the left-field fence. The ball clamored off the wall, and Hannah Adams and Charla Echols raced around the bases.

Lindaman provided a 2-1 lead, and the Gator softball team would not look back. In the end, the number six Gators walked out of Katie Seashole Pressly Stadium 3-1 winners over the number nine Kentucky Wildcats in the first game of their weekend series.

Through three innings, this was purely a pitching duel. Kentucky’s Autumn Humes went through the first three innings giving up one hit, a two-out single to Jaimie Hoover in the third.

For the Gators, it was the same story. Junior Elizabeth Hightower may have struggled slightly more, allowing a leadoff double in the third inning, but she was dominant. The reigning SEC Pitcher of the Week finished the game with seven strikeouts. Although, she found herself in a jam in the fourth inning.

Kentucky second baseman Lauren Johnson’s leadoff double initiated a string of three straight hits. Johnson eventually scored on an Autumn Humes sacrifice fly to give Kentucky a 1-0 lead. Fortunately for Hightower, she escaped the bases-loaded jam giving up one run.

In the bottom of the fourth inning, the Gators responded immediately.

Hannah Adams and Charla Echols reached on singles before Kendyl Lindaman stepped into the box.

The senior faced eight pitches before banking the ninth pitch off the left-field wall. Adams and Echols scored and the Gators established a 2-1 lead.

Lindaman, a preseason All-SEC Selection, says she knew it was an important at-bat, and she wanted the right pitch in order to make a difference.

Lindaman’s double provided a lead Tim Walton’s squad would not relinquish for the remainder of the game. Much of that can be attributed to the dominance of Elizabeth Hightower.

Shutting the game down

After giving up four hits through three innings, Hightower switched into high gear. The junior found her groove after the fourth inning kerfuffle. She was able to gather herself and redevelop her confidence inside the circle. Gator coach Tim Walton realized her poise when he called a timeout with the bases loaded and no outs.

After loading the bases with no outs, Hightower retired the final 12 batters she faced. Florida’s starting pitcher says she was trying to place the ball at the beginning of the game; trying too hard to hit certain spots rather than letting her pitching do the work.

In the end, Hightower’s statistics read four hits and a walk over her complete game to go along with seven strikeouts. On the season, Hightower now has an 8-0 record, four complete games, just five earned runs allowed through 48 innings pitched and 47 strikeouts.

Charla Echols provided an insurance run for Hightower in the bottom of the sixth inning; her double to center field scored Hannah Adams from first.

Hightower’s 1-2-3 inning to close out the game gave the Wildcats their first loss of the season.

Gearing up for Saturday

Tim Walton knows Kentucky has bats galore. Entering the game, Kentucky led the SEC in batting average and fielded two hitters batting above .500. Any team that is going to beat an offense like Kentucky will require a balanced defensive effort.

Jaimie Hoover and Cheyenne Lindsey provided the backdrop in outfield that contained Kentucky’s bats. Hoover had four putouts including two in foul territory on the run.

This blueprint for beating Kentucky will need to be transferred to Saturday when the two meet again.

Originally from Seminole in the Tampa Bay area, Kyle is a contributor for ESPN Gainesville as well as local NPR and PBS affiliate WUFT. Kyle wants to get into sports with a lofty dream of being a sports broadcaster. He was raised playing soccer and baseball while watching hockey and football, so the knowledge about various sports is fairly extensive.
@KyleFanslerUF
Previous Gators Men’s Hoops Fall short in SEC Tournament to Tennessee 78-66
Next Santa Fe Baseball Comes Out On Top Sweeping Baker County