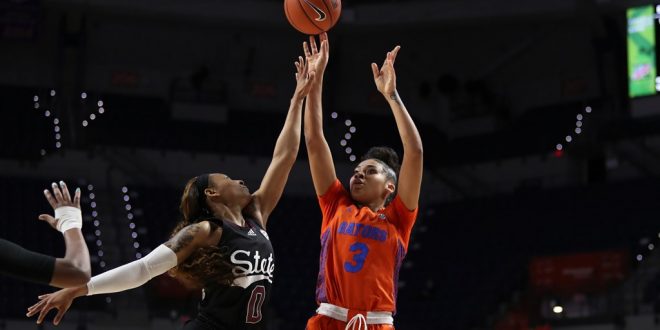 After five years with no post-season, the Gators’ Women’s Basketball team makes its return to glory.

The Drought is Over

Making their eighth WNIT appearance, the Gators last qualified for post-season play in the 2015-16 season. That season, the Gators were upset by Albany in Round One of the NCAA Tournament.

“We are excited and grateful for the opportunity to compete in the postseason this year. With all of the challenges presented to us this season, we are thankful to be able to play more games with this team. I’m proud of the way our program, and that’s everyone from players, coaches, support staff and trainers, have handled themselves through the adversity that we’ve faced and fought through together,” said Newbauer.

“We appreciate our medical personnel and our administration for making this all possible.”

Dutch freshman forward Floor Toonders leads the team in field goal percentage, scoring 60 percent of the shots she puts up. Toonders is also second in on the team for offensive rebounds, only behind sophomore guard Nina Rickards.

Senior guard Kiara Smith leads the team in average points with 19, 6.8 rebounds per game, and 3.8 assists per game.

She is the only player in the SEC to lead her team in all three categories.

The WNIT begins on Friday, March 19. The Gators’ first game is against the Charlotte 49er’s and is set for 5 p.m. The Gators are 7-1 all-time against Charlotte. The teams last met eight years ago, when UF knocked Charlotte out of the 2013 WNIT.

The Gators are guaranteed two games in the tournament, as losers are seeded into a consolidation bracket.

For the first time since 2006, the WNIT only selected 32 teams for the competition. Officials scaled the event down due to COVID-19 issues.

FloHoops.com will broadcast all games live starting on Friday.

Matthew Bell is a senior at the University of Florida. He completed his associates degree at State College of Florida in Bradenton and transferred to UF in 2019. His favorite sports are American football and baseball. Matthew also contributes to The Point Podcast and provides local hourly news for All Things Considered.
@@pod_mattb
Previous 7 Teams Representing the SEC in the NCAA Women’s Tournament
Next Lightning Look to Bounce Back Tuesday Night