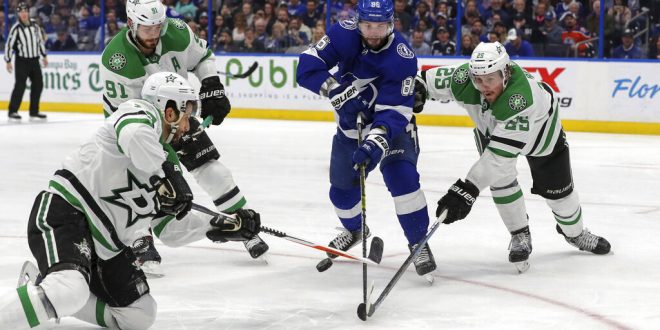 Following Monday’s home loss to the Nashville Predators, the Tampa Bay Lightning dropped out of a share for second place in the Central Division standings. The Lightning (19-6-2) sit two points behind the Florida Panthers and just a point behind the red-hot Carolina Hurricanes.

The Bolts will return to the ice Tuesday night as they head west for a road contest against the Dallas Stars. Lightning head coach Jon Cooper mentioned the difficulty of playing back-to-back games under such a quick turnaround. “When you’re getting in at 2 o’clock in the morning and playing a 5 p.m. game . . . those are the tough ones,” he said.

Despite outshooting the Predators by 13, Lightning goaltender Curtis McElhinney surrendered three unanswered second-period goals on only 25 shots (.880 save percentage). This was before an empty-netter clinched the 4-1 Nashville victory.

“We had one of our highest level of scoring chances we’ve had the whole year tonight,” Cooper said after the game. “The puck just didn’t go in for us, it’s not going to happen every night.”

Predators goalie Pekka Rinne held Tampa Bay scoreless until midway through the third period. Lightning captain Steven Stamkos lit the lamp for his team-leading 13th goal this season. On a two-on-two rush, Stamkos centered a pass toward the crease that fortuitously deflected off a defender’s skate and into the net.

But the comeback effort came too late. The Lightning failed to capitalize on a trio of power plays and early scoring opportunities. “We had more scoring chances in the first and second [period] by a larger margin than we did in the third,” Cooper said.

The Lightning and Stars met a few weeks ago in a home-and-home series; the Bolts defeated Dallas both times by a combined margin of 7-0. This season, Central Division opponents are extremely familiar with one another as they face off a whopping eight times.

“You know what to expect each and every game you go out there because you’re playing against the same team,” Lightning forward Anthony Cirelli said.

“We’re playing teams eight times a year. Each game you get to see their systems.”#NSHvsTBL | Anthony Cirelli: https://t.co/SdEMGIkqu8 pic.twitter.com/kLezH0kfHf

Tampa’s starting goaltender Andrei Vasilevskiy recorded back-to-back shutouts and will return between the pipes after getting the night off Monday. “We’ve given [Vasilevskiy] a bunch of rest in this little stretch of games,” Cooper said. “Anything that’s going to put our players . . . in a better position to succeed, we’re going to do it.”

The Stars (9-9-6) are 16 points behind the Bolts in the Central Division standings. However, they are coming off a shootout win at Columbus. Despite an average record, Dallas maintains a positive goal differential (+5). But the Stars will need to prepare for a two-way Lightning squad that enters the Lone Star State with a league-best +34 scoring differential.

Puck drop at American Airlines Center is scheduled for 8:30 p.m.

Hello, I am currently a junior at UF studying sports media journalism with a concentration in Political Science. I contribute web and radio content weekly for WRUF ESPN Gainesville. Be sure to check out some of my recent articles!
Previous Lady Gators Return to Post-Season
Next Buccaneers Retain Their Own