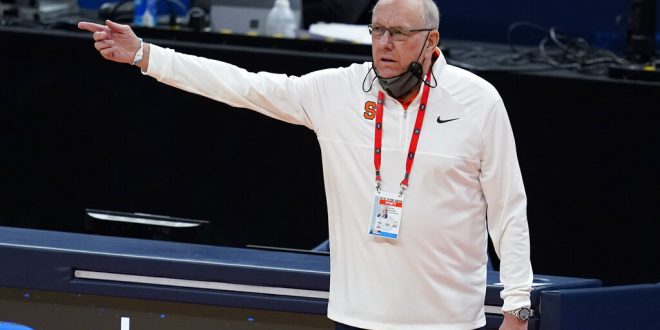 Teams do not stumble into the Sweet 16 of the NCAA Tournament. Sure, some teams may have an easier path to the third round of the tournament, but there are no slouches. A quarter of the teams in the Sweet 16 are double digit seeds, but look at the teams they knocked out.

Fifteen-seed Oral Roberts took down two-seed Ohio State. Twelve-seed Oregon State beat a four-seed and a five-seed. Eleven-seed Syracuse out of the ACC is no different. However, Jim Boeheim’s squad will face their toughest test of the tournament, and perhaps of the season, in the Sweet 16.

The Orange squeaked into the tournament as an at-large team out of the ACC. A comfortable win over North Carolina State of the first round of the ACC Tournament preluded a buzzer-beater loss against Virginia. Their 16-9 record put them uncomfortably on the bubble, but they managed to capture an 11-seed.

Once the Orange knew their spot, they got to work. Syracuse is on a great run of form, which head coach Jim Boeheim says is important when March rolls around.

A first-round matchup with the Mountain West Champions San Diego State is no easy task.

In steps Boeheim’s son. Buddy Boeheim put up a casual 30 points, including seven of 10 from behind the arc, in Syracuse’s win. As a team, the Orange shot 55 percent from the field and from three.

In their Round of 32 game, Syracuse took on three-seeded West Virginia. A significantly closer game against an objectively better team, it was Buddy Boeheim again. His 25 points in their upset win gave him a special honor.

Despite this being coach Boeheim’s 20th trip to the Sweet 16, his son is stealing the headlines. Buddy now holds the third-most points in the first two games of an NCAA Tournament in Syracuse history behind Gary Clark’s 60 in 1957 Gerry McNamara’s 56 in 2004.

Coach Boeheim says he is proud of his team for their two upset-victories, but he is especially proud of his son.

Next up is a team that has been consistently dominant on both sides of the ball: Houston.

If there was a team that does not get recognition based on how well they play, it might be Houston. Houston is 26-3 this season, with those three losses coming by a combined 15 points. The Cougars won the American Athletic Conference, beating Cincinnati by 27 in the Championship game. Coach Boeheim says Kelvin Sampson’s squad are statistically dominant on both offense and defense.

Boeheim could not be more spot on. Houston’s 77.4 points per game is top-50 in the country, and their 57.9 points against per game is second-best in the nation. Interestingly, if Houston were to advance, there is a chance they would play the best-defensive team in college basketball, eight-seed Loyola Chicago.

Much of that stellar defense can be traced to their shot-blocking and shot-defending. The Cougars give up the lowest field goal percentage in the nation at 37.3 percent, a whole percentage point lower than the team in second.

Coach Boeheim understands the challenge, saying if teams want to succeed in March, they have to play their best.

Expect a heavy dosage of Buddy Boeheim’s excellence so far to keep Syracuse afloat. However, if the Cougars’ stifling defense has their way, shooting might not bail out the Orange.

The Sweet 16 begins on Saturday, with this Syracuse-Houston matchup acting as the night-cap to a busy day. Tip-off is set for 10 p.m. on Saturday night.

The winner of this game will take on the winner of the contest between No. 12 Loyola Chicago and No. 8 Oregon State. As it stands, Houston is by far the best statistical team left in the region, but March has a funny way of making things interesting.

Originally from Seminole in the Tampa Bay area, Kyle is a contributor for ESPN Gainesville as well as local NPR and PBS affiliate WUFT. Kyle wants to get into sports with a lofty dream of being a sports broadcaster. He was raised playing soccer and baseball while watching hockey and football, so the knowledge about various sports is fairly extensive.
@KyleFanslerUF
Previous Florida Gators’ defense looks to improve in 2021 season
Next Coach Rowland Talks Gators Gym 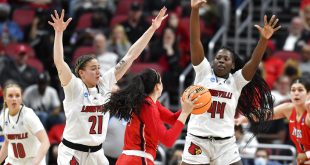 The NCAA women’s tournament continues this weekend with the Sweet 16. The fourth seeded Tennessee …