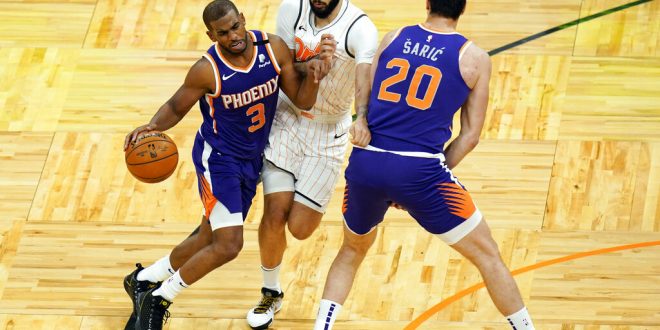 It has been a crazy 24 hours for the Orlando Magic as they defeated the Phoenix Suns 112-111 Wednesday night and then traded three of their current starters before the trade deadline on Thursday.

The Magic made deals across the NBA to send Nikola Vucevic, Evan Fournier and Aaron Gordan out of Orlando.

With the Magic down by one point with six seconds left, Fournier drove to the hoop for the game-winning layup right before Devin Booker missed a reverse layup at the buzzer.

EVAN FOURNIER WINS IT for the @OrlandoMagic! pic.twitter.com/TKyOzHEZPg

The win for the Magic was only their 15th of the season. In their last games with the Orlando, Vucevic had a game-high 27 points, while Fournier had 21. The Magic shot 47 percent from the field and made 13 of 37 three-pointers despite turning the ball over 11 times.

Orlando trailed by eight points after the first quarter and then was down by five heading into the final frame but was able to limit Devin Booker to 25 points on 21 shots.

With Orlando tied for last place in the Southeast Division, they are sending Vucevic and Al-Farouq Aminu to the Chicago Bulls for Otto Porter, Wendell Carter Jr. and a first-round pick in both 2021 and 2023, according to ESPN.

The Bulls are currently 19-24 and sit in tenth place in the Eastern Conference. They have lost four of their past five games and are adding an All-Star center in Vucevic, averaging 24.5 points per game and 11.8 rebounds.

Vucevic was a former first-round pick with the Philadelphia 76ers before playing for the Magic in 2012.

The Magic are also reportedly trading Fournier to the Boston Celtics for two second-draft picks according to ESPN. The guard is averaging just under 20 points per game. Fournier has spent the past seven season with the Magic.

According to reports from ESPN’s Adrian Wojnarowski, the Nuggets are are in the process of finalizing a deal to send Aaron Gordon to Denver. Orlando will gain Gary Harris, RJ Hampton and a first-round pick in exchange for Gordan according to reports.

The forward is averaging 16.6 points per game on the season.

Up Next for the Magic

The Magic will next play on Friday, March 26 when they face the Portland Trailblazers at 8 p.m.

Previous What’s Next for Florida Gators Hoops?
Next No. 1 Baylor Faces Tough Sweet 16 Test In No. 5 Villanova