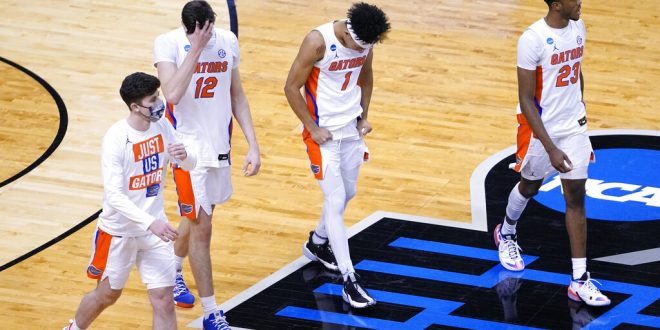 Florida players walk off the court after a college basketball game against Oral Roberts in the second round of the NCAA tournament at Indiana Farmers Coliseum, Sunday, March 21, 2021 in Indianapolis. Oral Roberts won 81-78. (AP Photo/AJ Mast)

What’s Next for Florida Gators Hoops?

For the Florida Gators men’s basketball team, it was a season full of highs and lows. It survived Virginia Tech in the first round of the NCAA tournament. However, the Gators saw its season go down the drain when 15-seed Oral Roberts knocked them out in the Round of 32.

Three straight tournaments have resulted in three consecutive second-round exits for head coach Mike White’s team. And despite the fact that there are no seniors leaving, the program will endure some changes. So, who will leave the squad, who will stay and who will enter?

Mann Heading to the League

Only one Gator has confirmed that they are moving on from the team. And it’s Gainesville’s own Tre Mann.

Mann produced a breakout season for the Gators in which he led the team with 16 points and 3.5 assists per game. Plus, he averaged 21 PPG during March. The sophomore guard declared for the 2021 NBA Draft on Wednesday.

One possibility to fill Mann’s shoes at the guard position is rising junior Ques Glover. However, Glover only averaged 8.4 minutes per game and could enter the transfer portal.

Then, Jason Jitoboh could also transfer due to a lack of playing time: the center averaged just 3.7 minutes per game over the course of the season. Additionally, rising junior guard Scottie Lewis saw his usage dip slightly last season. Lewis could make a surprising move like former Gator Andrew Nembhard. Nembhard transferred to Gonzaga during the offseason.

Of course, the health of Keyontae Johnson is another uncertainty for Florida. It remains to be seen if his playing career will continue or if he will play next season.

In terms of Gators who are staying in Gainesville, Cleveland State transfer Tyree Appleby will return for his senior year. He revealed his decision on Twitter this past Tuesday.

Undoubtedly, UF should have no problem returning players since they aren’t losing any seniors. But who will the new players be?

The Gators are only adding one recruit in the 2021 class in Kowacie Reeves Jr. He is a five-star recruit from Macon, Georgia according to rivals.com. The shooting guard could have a chance to compete for a starting guard position.

Any other additions that Florida makes will be done via the transfer portal. This is a relatively unsurprising method of landing new players for a Gators’ squad that featured three transfers last season; Appleby, Colin Castleton and Anthony Duruji.

One particular target this offseason is Boston College forward CJ Felder. He averaged 9.7 points per game and 5.9 rebounds per game for the Eagles during the 2020-21 season.