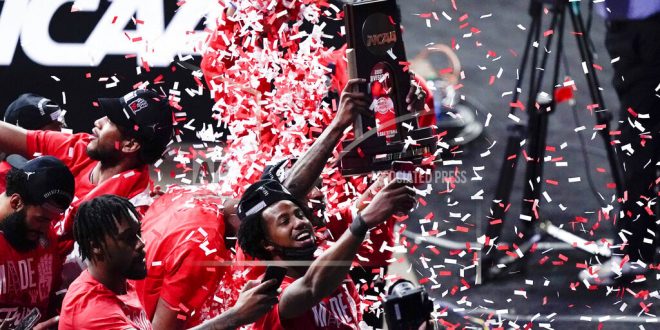 Trailing by three with under four minutes to go, Oregon State guard Gianni Hunt miraculously banked in a contested 3-pointer to the exhilaration of the Beaver bench. Hunt’s basket knotted up Monday’s Elite Eight matchup for the first time since tip-off.

Despite the 17-point Oregon State comeback, Houston relentless’ effort on the boards granted it seven offensive rebounds down the stretch and multiple second-chance scoring opportunities.

“[Oregon State] had us on our heels, but we were able to get back to our roots,” Houston guard Dejon Jarreau said. “We started to play harder than them in the final couple of minutes and we were able to pull away and make free throws.”

The two-seeded Cougars knocked down nine of thirteen free throws in the last three minutes en route to a 67-61 win Monday over the 12-seeded Beavers.

The win advances Houston to its first Final Four since 1984 when Hall of Famers Hakeem Olajuwon and Clyde Drexler led the “Phi Slama Jama” to the national championship.

“I’m happy to bring the excitement back to Houston and continue what the Phi Slama Jama did,” Jarreau said.

The Cougars jumped out to an early double-digit lead and carried a commanding 17-point advantage into halftime. Houston doubled the first-half score of Oregon State after it held the Beavers’ top-two scorers to only thee points combined. Houston dominated the glass and won the turnover battle, but Oregon State’s bench answered in the second half.

The Beavers’ bench provided 17 second-half points in contrast to Houston’s goose egg. Oregon State found its stroke following halftime as it shot 56% from the floor and 40% from beyond the arc. The Beavers dominated the paint as they outscored Houston 20-4. After eight first-half turnovers yielded seven Houston points, Oregon State tuned it over only twice in the second half.

But guards Quentin Grimes and Marcus Sasser dropped 22 of Houston’s 33 second-half points to fend off the comeback and clinch its 11th straight victory.

Houston has yet to face a single-digit seed in the NCAA Tournament, but things will change in the Final Four. The Cougars will take on the South Region’s top-seeded Baylor Saturday at Lucas Oil Stadium. Houston head coach Kelvin Sampson will have a chance at making his first NCAA National Championship appearance in 28 years of coaching. In its Elite Eight contest, Baylor took down three-seeded Arkansas 81-72 Monday night to advance to its first final four since 1950.

“We’ve taken a group of kids to get them to believe and they’ve accomplished something that . . . no matter what happens this weekend, it’s something that nobody can take from them,” Sampson said. “They’ll always be known as a Final Four participant.”

Hi, my name is Griffin Foll and I am currently a senior at UF studying sports media journalism with a concentration in political science. I contribute weekly web and radio content for WRUF ESPN Gainesville and help cover the World Cup/Champions League soccer beat. Be sure to check out some of my recent articles!
Previous Gators Baseball Game Against Mercer Canceled
Next Omar Payne becomes fourth player to enter NCAA Transfer Portal