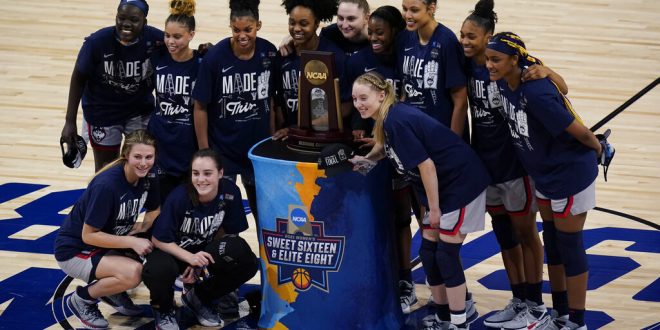 UConn players celebrate with their trophy after defeating Baylor in a college basketball game in the Elite Eight round of the women's NCAA tournament at the Alamodome in San Antonio, Monday, March 29, 2021. (AP Photo/Eric Gay)

Uconn Women’s Basketball is headed back to the Final Four for the 13th time in a row. But this one was a bit closer than normal.

No. 2 Baylor closed the gap to one with seconds left, but it was too late to forge the comeback against the No. 1 Huskies.

Paige Bueckers led the Huskies with 28 points and three steals. Christyn Williams was the Huskies’ next leading scorer with 20 points and six rebounds.

DiJonai Carrington nearly had the winning shot for Baylor, but it got intercepted. She still finished with 22 points and seven rebounds for the Lady Bears. Nalyssa Smith added 14 to Baylor’s total, along with 12 rebounds and two steals.

Close Until the End

Baylor had opportunities to take this game from under the Huskies. Carrington kept the Lady Bears in the game and gave them their first lead near the end of the first half. She scored 14 points in the first half alone to lead all scorers.

Didi Richards’ hamstring injury with 2:37 left to go in the third quarter, gave the Huskies all the momentum back though. Naismith Defensive Player of the Year, Richard’s presence on the court was immediately felt. She returned for a few minutes in the fourth, but the injury slowed her down and made it hard to keep up with the game.

The @UConnWBB lead is down to 4 late in the 4th.

The Lady Bears had the opportunity to win the game in the final seconds. Carrington took a shot on the baseline with under four seconds remaining, but she was blocked by a pair of UConn defenders. Many, including Baylor coach Kim Mulkey, thought Carrington was fouled on the shot, but there was no call.

Baylor’s defense came in with the top defensive field goal percentage in the NCAA for the fourth consecutive year. This challenged UConn in the first half and kept them scoreless for long periods of time.

The Huskies went on another scoring drought in the third, but an injury to Baylor star Didi Richards gave momentum to UConn.

The Huskies found themselves down late in the game but had hot streaks that kept them alive. This includes their 19-0 run in the fourth quarter. Bueckers proved she deserved every bit of the hype, scoring 10 of her 28 points in the fourth. The last time UConn missed the Final Four was in 2007 when Bueckers was just five.

The Huskies will take on the No. 3 Arizona Wildcats in the Final Four.  The Wildcats held off No. 4 Indiana 66-53 last night. Tipoff is still undetermined.