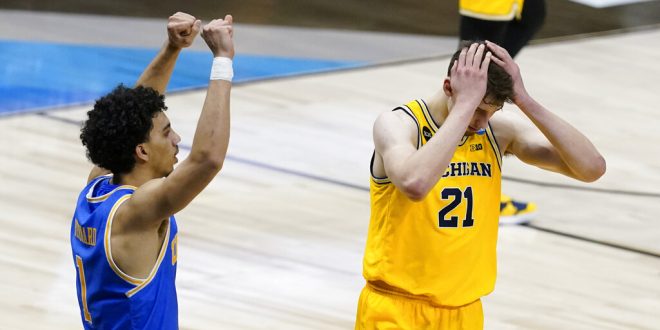 From the First Four to the Final Four, UCLA becomes just the sixth double-digit seed to reach the Final Four with a 51-49 victory over one-seeded Michigan.

The sophomore guard was unstoppable last night. With both teams coming out the gates slow on the offensive end, Johnny Juzang was the catalyst for the Bruins. He scored 18 of UCLA’s 27-first-half points getting it done from everywhere on the court.

Johnny Juzang (18pts) was LIGHTS OUT in the 1st half ♨️@UCLAMBB #MarchMadness pic.twitter.com/Oku07qA28v

Juzang summoned his one shining moment early in the second half. As Michigan is on a run cutting a nine-point deficit, Juzang left the game with an ankle injury with 15:20 left in the game. He soon returned and finished the game for the Bruins and had a game-high 28 points.

Juzang has been nothing short of spectacular this tournament averaging 21.6 points per game. In addition, Juzang tied Bill Walton for the most points through their first five games in school history. The two trail just Kareem Abdul-Jabbar (Lew Alcindor).

Johnny Juzang finished with a game-high 28 pts for UCLA

How They Got It Done

Other than the obvious reason of Johnny Juzang, this win was a team effort, at least on the defensive end. UCLA forced 14 turnovers and held the Wolverines under 50 points for the first time all season. UCLA Head Coach Mick Cronin talks about how the defense continues to carry the Bruins.

Chris Smith tore his ACL, Jalen Hill has been out for personal reasons and the Bruins continue to face adversity. A team that has been led by its scoring all season long, UCLA has adapted to how to beat their opponents. No matter the challenge, they’ve found a way to get the job done.

The defense that was so effective all game long, was put on full display in the closing minutes. Michigan also missed their final eight field goals and had a few good looks in the final seconds. Although, it was the Bruins defense that stood tall.

Franz Wagner missed two potential game-winning threes including this one as time expired. The sophomore was just 1-for-10 from the field including 0-for-4 from deep in 34 minutes of game time.

From the First Four to the Final Four.

UCLA will take on number-one overall seed Gonzaga as the Bulldogs look to extend their perfect season. Mark Few‘s team opens the game as 14-point favorites and just came off a dominating win against USC.

Despite how the game goes on Saturday, Cronin is proud of his team and all they’ve accomplished.