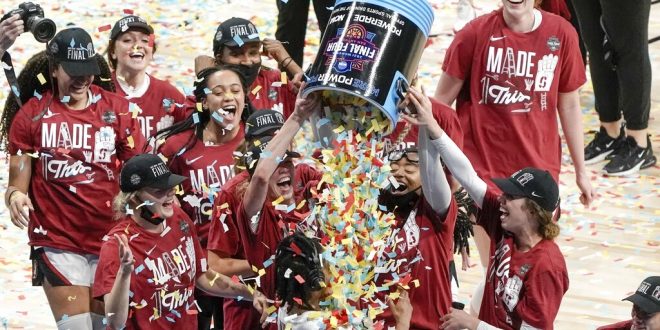 Stanford celebrates after an NCAA college basketball game against Louisville in the Elite Eight round of the Women's NCAA tournament Tuesday, March 30, 2021, at the Alamodome in San Antonio. Stanford won 78-63 to advance to the Final Four. (AP Photo/Morry Gash)

Louisville Falls to No. 1 Seed Stanford in Elite Eight

Stanford came out victorious in the battle of the cardinals ending Louisville’s season in the Elite Eight.

Stanford women’s basketball defeated Louisville 78-63 advancing to its first final four appearance since 2017 and 14th of all time.

The loss brings an end of an era for Louisville guard, Dana Evans. She finished in her final game with 24 points and shooting 9-of-20 from the field.

Louisville came out hot, scoring 21 points in the first quarter and 17 in the second. They finished 6-of-10 from the three in the first half and were unstoppable from midrange. Louisville made Stanford pay every time it went under a screen, hitting 16-of-31 from the field for a 38-26 lead.

Meanwhile, Stanford could not get anything to fall. It was 1-of-9 from the three-point range and shot only 28% from the field. They had ten offensive rebounds that became only nine put-back points that kept them in the game.

After playing one of its worst halves on the season, Sanford regrouped and came out firing.

Louisville had the lead by 12 going into halftime and continued to lead by 14 points with 7:07 left in the third quarter.

Stanford used a 26-7 run in the second half to take a 55-50 lead with 8:03 left in the fourth quarter. Louisville could not recover. That run was carried by Stanford forward Ashton Prechtel off the bench, who scored 16 points in the second half and made all six shots she took.

The win moves Stanford one step closer to getting coach Tara VanDerveer her first national championship since 1992 and No. 3 overall.

Stanford will take on No. 1 seed South Carolina in the Final Four on Friday for a rematch of the 2017 national semifinals.

Previous UCLA Advances to Final Four
Next White Sox, Twins set to battle it out in AL Central