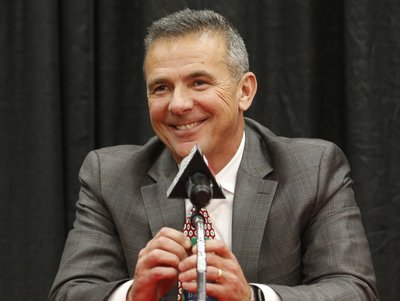 Many college football coaches don’t make the leap to coach at the next level due to lack of success. Only three of them have collected a winning record.

He recently returned to Gainesville to witness Florida’s Pro Day. The former three-time National Champion sat down for an interview for Sportscene with Steve Russell.

We’ve hit the road for Pro Days to find the best.

Go behind the scenes in Chapter 1 of The Hunt presented by @gatorade: https://t.co/f8jpogKjFg pic.twitter.com/fBH3P79AkA

Transition from College to NFL

He quickly noticed the stark difference between how to gather players.

Meyer said the free agency model the NFL uses is awful because he couldn’t meet the player and really get to know them. Even four months into the job, he still hasn’t been able to host a team meeting because it’s against league rules. In college football, team meetings are important when a coach tries to establish a culture, he said.

“We’ve had a lot of players, fortunately, come back and meet our staff and spend time with us,” Meyer said.

But the styles of the two styles have become similar in recent years like many NFL teams implement a version of the spread offense when they strayed away from it years ago.

Meyer noted that at Florida and Ohio State one of their main goals was trying to get players drafted as high as possible. He’s thankful now that the players are more focused on team goals.

Russell and Meyer then pivoted to the NFL Draft where Meyer spends most of his time studying prospects.

Jacksonville holds the No. 1 pick in the draft, and he has confidently said that the organization is leaning toward selecting Clemson quarterback Trevor Lawrence. ESPN’s lead-draft analyst Mel Kiper Jr. wrote that Lawrence slots in the top five quarterbacks he’s ever graded.

Meyer didn’t just roam the sideline at his pro day on Feb. 12. He stood within a couple yards of him as Lawrence tossed over 50 passes.

He said he saw what he expected because he studied him as a college football studio analyst for Fox Sports. However, he wanted his offensive coordinator Darrell Bevell and passing game coordinator Brian Schottenheimer to see him in person.

One of Meyer’s biggest goals as a head coach for the Jaguars is that he wants to turn Jacksonville into a destination for free agents. His plans are to reshape the infrastructure of the organization.

Meyer is thrilled they filled needs along the defensive line and secondary and added a veteran receiver and running back to complement their young talent.

But he said Jacksonville has more work to do. It’ll most likely choose Lawrence, but NFL fans will learn for sure when the draft kicks off on April 29 at 8 p.m.

Zachary Huber is a senior journalism student specializing in sports media at the University of Florida from Jacksonville, Florida. He works at The Alligator, covering gymnastics and volleyball while working at ESPN Gainesville. Follow him on Twitter @zacharyahuber.
@@zacharyahuber
Previous Mike White Looks to Rebuild Through Transfer Portal
Next NCAA Men’s National Title Battle: Gonzaga vs. Baylor Preview and Predictions