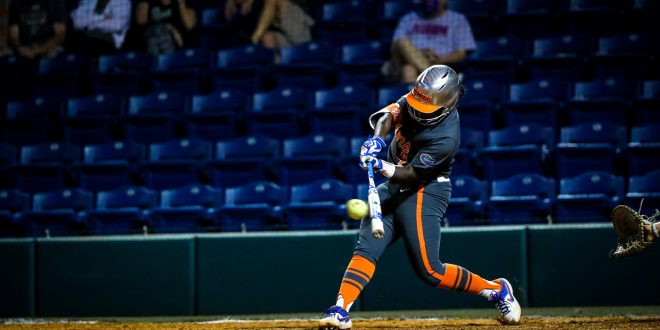 Florida's Charla Echols rockets a double to the wall in the Gators' second game in their doubleheader against USF. Echols's double scored Hannah Adams from first to give the Gators a 2-1 lead and the victory. (Photo Credit: @GatorsSB / Twitter)

Flash forward to the fifth inning of the second game, and the Gators and Bulls are knotted at one. Echols returns to the plate, launching another ball to right-center. This time, the ball narrowly stayed in the yard. However, Hannah Adams was able to race around the bases from first to score. Florida’s 2-1 lead after the double would prove to be the difference in the second game.

At the end of the day, the Gators picked up two wins against USF on Wednesday night.

Coming into Wednesday night’s doubleheader, Florida’s offense was red-hot. That trend continued against the Bulls.

Echols got the ball rolling, but it was Florida’s willingness to wait for their pitch that was crucial. In the first inning, USF pitchers Georgina Corrick and Camryn Dolby combined for five consecutive walks with two outs. As a result, Jaimie Hoover and Hannah Adams earned RBI walks. At the end of the first frame, Florida ballooned its lead to five runs.

Florida coach Tim Walton’s club would add some insurance through Kendyl Lindaman in the fourth inning. The senior’s fifth home run of the year made it 7-0.

Despite USF mounting a brief, one-run comeback, Florida put the game away with a run-rule victory in the sixth. However, much like in the first inning, USF had self-inflicted wounds. Four-consecutive walks put two Gators across the plate to initiate the eight-run rule.

On the other side of the circle, Florida’s Elizabeth Hightower continued her great form. Hightower only yielded one run on three hits, and that one run came in the sixth inning with two outs.

With a 40-minute hiatus separating the games in the doubleheader, Florida’s bats seemed to cool with the weather. The one exception to that statement turned out to be a significant moment in the game.

Emily Wilkie battled a lengthy at-bat to a full count. The Gator freshman sent the eighth pitch over the fence in left-center field as Lindaman did the game before.

Florida would have to wait before they could muster up any more threats on offense. Meanwhile, Tim Walton sent out Natalie Lugo to the circle for the Gators.

Lugo performed well, but the Bulls had a response not long after Wilkie’s home run. In the top of the third, Nicole Bechtel’s inning-opening double put a runner in scoring position with no outs. Pinch-runner Alexis Buchman was on third when Natalie Lugo threw a ball past Wilkie, Florida’s catcher. USF tied the game at one, but Lugo managed to limit the damage.

Both teams played a safe game, until Charla Echols came up for her third at-bat of the game; her double off the top of the wall scored Hannah Adams and restored the Gators’ one-run advantage.

Katie Chronister entered the game in relief of Lugo with the 2-1 lead to defend. She faced six Bulls and got six outs and Florida came away with a 2-1 win.

Florida improved its record to 29-4 with the doubleheader win.

The Gators will have a weekend away from SEC play, but will host Western Kentucky on Saturday and Sunday morning, with an exhibition game against Softball Canada after their game on Saturday.

Originally from Seminole in the Tampa Bay area, Kyle is a contributor for ESPN Gainesville as well as local NPR and PBS affiliate WUFT. Kyle wants to get into sports with a lofty dream of being a sports broadcaster. He was raised playing soccer and baseball while watching hockey and football, so the knowledge about various sports is fairly extensive.
@KyleFanslerUF
Previous Gators shuts down FAMU in seven inning mercy rule
Next Young Talent Shine in Magic’s 131-116 Loss Against the Wizards