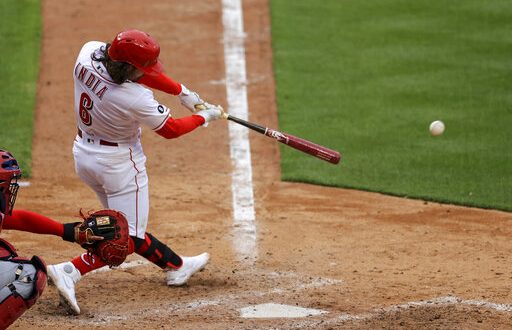 From 2016-2018, India played college ball under Kevin O’Sullivan. The 2018 SEC Player of the Year had a storied career at Florida. In 2017, he was a starter for the University of Florida’s lone College World Series victory. In 2018, the third baseman took a step further. Surely, India enjoyed one of the best offensive seasons in school history with a .350/.497/.717 slash line. Furthermore, the 2018 consensus All-American batted .310 with 31 homers and 126 RBI during his career at Florida. For that reason, India became the second highest draft pick in school history when the Reds took him fifth in the 2018 MLB Entry Draft.

Now, India is showing the world what all Gator’s fans knew he was capable of. Through six games, the Reds rookie has flashed his glove and offensive acumen to the Majors. All in all, the No. 5 prospect in Cincinnati’s system may just be getting started.

After a strong spring training, India was invited to join the Reds’ opening day roster. In detail, he posted a .313/.441/.604 slash line with three homers and seven RBIs. It became evident the 2018 top five pick would be seeing the major league’s in 2021.

India was apart of the opening day lineup for Cincinnati at second base. Ever since, the rookie has never looked back. On opening day against St. Louis, he went 2-3 with an RBI. The next day, he followed with 1-4 and another RBI in a series sweep over the Cardinals. In this series, India flashed his defensive prowess with a highlight reel throw to first base.

In the series against Pittsburgh, he found continues success. Monday, India went 1-4 with an additional RBI. Tuesday, he had his best game to date with four RBIs going 3-4 at the plate. The infielder has hit an RBI in every game this season.

Wednesday found a frightening situation for India. In the bottom of the third inning, Pirates pitcher Craig Kuhl nailed him with a 94 mph fastball in the head. Surprisingly, India remained in the game. In the fifth, he rallied to drive in two runs at his next at bat.

Jonathan India now has 10 RBIs in six games with the @Reds. pic.twitter.com/aOVhBsuoWN

India’s strong start has put the MLB on notice. Not to mention, CBS Sports.com named him as one of the top prospects to watch in baseball. The infielder is batting .476/.480/.619 with 10 RBI (No. 4 in the MLB). Friday, the Reds travel to Arizona where India will look to continue his early success.

Sam Petosa is a Journalism major pursuing a Specialization in Sports and Media at UF. The South Florida native produces daily shows for WRUF, including "Sport Scene with Steve Russell, and "The Tailgate." In addition, Sam provides weekly sports updates for WUFT News and radio Sportscenter's for WRUF radio. Sam has been a writer at ESPN Gainesville since January 2020.
@sampetosa5
Previous Miller Moving Out: Who Will Take the Reins for Arizona Men’s Basketball?
Next Rays Doomed By Mishaps And Cold Bats, Swept By Red Sox