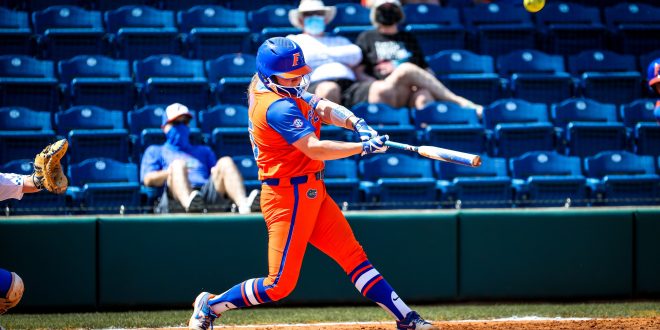 Bama’s ace, Montana Fouts, bounced back from her loss on Friday with her 14th win of the season, and Elizabeth Hightower took just her third loss of the season on four innings of work in the circle.

The Gators took the first two games of the series 2-0 and 9-2 but couldn’t close out the sweep, despite leading 2-1 early in the game.

Unlike the first two games of the series, where the lead didn’t change once, game three between the Tide and Gators featured several lead changes in the first few innings.

The first two Crimson Tide batters to face Hightower in the game, KB Sides and Bailey Hemphill, both reached on singles. Kaylee Tow then did her job in the three-hole, grounding out to second to score Sides and give the Tide their first lead of the weekend.

Hightower got out of the jam, though, forcing two groundouts to limit the damage to one run in the first. And soon enough, the Gators answered.

In the top of the third, the Gators started to piece together some baserunners. Baylee Goddard and Kendyl Lindaman both walked, and Charla Echols singled to juice the bases for catcher Julia Cottrill.

And Cottrill delivered. With two outs, she lined a two run single in the gap between first and second to give Florida a 2-1 lead.  Those would be the only runs of the inning, but the damage was done.

Unfortunately for the Gators, their 2-1 lead did not hold up.

In the home half of the third, Tow reached on a fielder’s choice, and Sides scored on a throwing error. Kayla Davis then reached on an RBI groundout to regain the Crimson Tide lead at 3-2. They would never give it back, as Fouts held the Gators off the scoreboard for the rest of the game.

The junior ace pitched a complete game while limiting Florida to only four hits and posting 10 strikeouts. Although she took the loss on Friday, Fouts posted two strong starts over the weekend.

In the two games combined, she threw 14.0 innings, allowed four earned runs and nine hits and struck out 21.

Had to have it, and got it done. Masterful performance from @MontanaFouts in the circle, who faced the minimum in the last four innings. Great job by the offense taking advantage of rare Florida mistakes. Gritty victory on Championship Sunday! Back at it next week. https://t.co/8vSU7yFVzc

Although Hightower earned the loss in Sunday’s contest, only one of the four runs she gave up was earned. With a 15-3 record, her ERA now sits at 1.34.

After taking two of three in Tuscaloosa, the Gators have a chance to overtake the Crimson Tide in the national rankings. They’ll travel to Fort Myers for a midweek matchup with Florida Gulf Coast and then return home for a weekend series against South Carolina.

The Tide will get a short break from SEC action with a game against Southern Miss and two games against Louisiana in store for this week.

I'm a third-year student at the University of Florida passionate about storytelling and sportswriting. My goal is to work in communications for a professional sports team after I graduate.
Previous ‘Bama Errors Lead to Gator Softball Series Victory
Next Gator Volleyball Advances To Elite 8 in NCAA Tournament