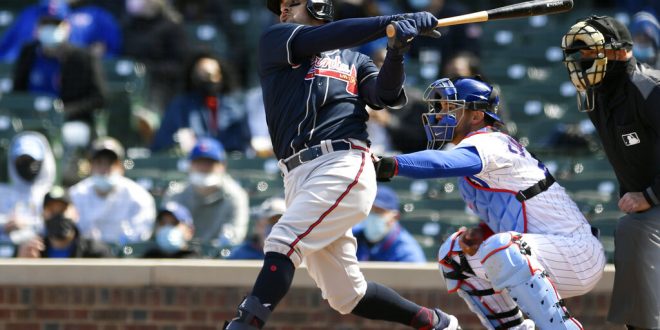 Atlanta Braves' Sean Kazmar Jr. bats during the fifth inning of a baseball game against the Chicago Cubs, Saturday, April 17, 2021, in Chicago. Kazmar Jr. returned to the major leagues after an 13-year absence, pinch hitting for the Braves. (AP Photo/Paul Beaty)

If you googled Sean Kazmar Jr. last week, what you may have come across were some minimal stats from his 2008 stint in San Diego. Today, it is a different story. Atlanta Brave Sean Kazmar Jr. sets a new record in Major League Baseball after taking a 13-year hiatus from the major leagues. According to the Elias Sports Bureau, Kazmar’s appearance breaks the previous record set by Ralph Winegarner.

Kazmar started his MLB journey as a rookie with the San Diego Padres in 2008. However, he would spend over a decade in the minors. He did not call it quits. Instead, he kept his eye set on one day gracing the big-league stage once again. While chasing his big-league dreams, Kazmar has played for minor-league teams affiliated with the Padres, Mariners, Mets and Braves. However, his longest stint was with the Braves Triple-A Gwinnett Braves. Primarily a second baseman, the 36-year-old always kept hope alive that he would be called up.

In ’08, the Georgia native posted just two RBI in 39 plate appearances. While he did ground out in his at-bat with the Braves, his name will be cemented in the history books.

His story is one of perseverance and that tall tale of never giving up on your dreams. He could have left his cleats at home and taken up a “normal” job. Instead, he was committed to his life as a ballplayer. Even in a pandemic-ridden season, he was dedicated. There was no minor league season. Instead, he lived off unemployment checks and took batting practice at home. When it may have been appropriate to leave the game, he always knew his time would come.

While it can not be predicted when Kazmar will strut to the batter’s box again. He will always be a figure representing hope and relentless effort.