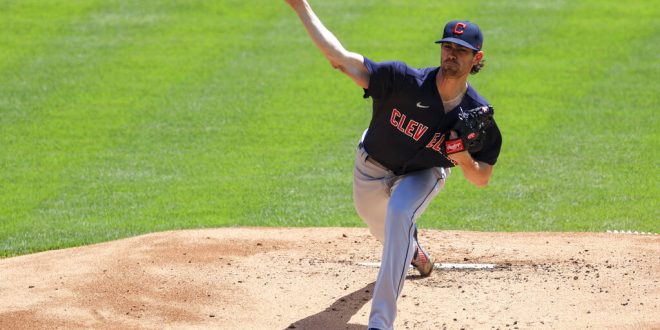 Shane Bieber kept up his record strikeout run, striking out 13 and pitching the Cleveland Indians past the Cincinnati Reds by a score of 6-3 on Sunday.

Bieber became the first pitcher in MLB history to begin the season with four straight starts with at least 10 strikeouts since the mound was moved to its current distance back in 1893, according to Elias Sports Bureau.

Shane Bieber has 6 strikeouts through 5 IP so far today. He's struck out 10+ in each of his 1st 3 starts this season, entering today.

But this was not the end for Bieber and breaking records. On Sunday, Bieber additionally became the first pitcher in franchise history to record six consecutive double-digit strikeout performances, dating back to Sept. 17.

The 2020 American League Cy Young Award winner has matched Hall of Famer Nolan Ryan for the most strikeouts through the first four starts of a season, with 48. In addition, Bieber has struck out at least eight in 16 straight starts, which is one short of Randy Johnson’s major league mark.

With his 13 strikeouts today, Biebs tied Nolan Ryan for the most strikeouts all-time through the first 4 starts of a season.#OurCLE pic.twitter.com/uAb80AqbIC

After losing the first two games of the series to Cincinnati, Cleveland was in need of two things: a break for its bullpen and a win. There was no better solution than sending Bieber out to the mound.

Bieber pitched for eight innings against the Reds. In those eight innings, he allowed three runs and six hits with two walks.

Cleveland’s offense provided some run support for Bieber, and together the Indians salvaged a win in the all-Ohio series. In the first inning, Jose Ramirez hit a solo home run into the upper deck. Roberto Perez hit a three-run homer off of Wade Miley over the center-field wall in the fourth inning for a 4-0 lead. The last two runs were courtesy of Jordan Luplow’s two-run homer in the seventh.

With this win in Cincinnati, the Indians are ready to put their 3-4 road trip behind them. The Indians will return home to start their two-game series against the Chicago White Sox at 6:10 p.m. on Tuesday.