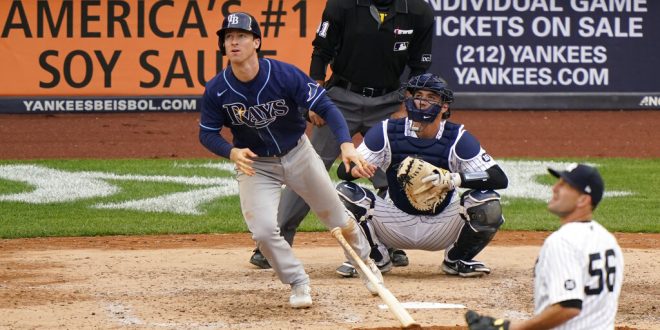 The Tampa Bay Rays traveled to New York to face the Yankees on their home turf. The Rays completed a three-game sweep against the Yankees, with a 4-2 series finale.

This is the second time in the last two years in Yankee Stadium that the Rays were able to pull a clean sweep. They have won 18 of their past 23 games against New York. This loss also extended the Yankees’ losing streak to five games, the team’s worst start since 1997.

It is gratifying to come in here and for the guys to find a way to complete a series and win three. It’s just not an easy thing to do, it doesn’t happen often, so you’ve got to enjoy it when it does.

New York managed only 11 hits throughout the entirety of the series, and Tampa was able to outscore them 17-7.

Many Yankee fans were excited for an ace Gerrit Cole start on the mound. Despite Cole entering the matchup with a 1.19 ERA, Tampa Bay’s strong offense prevailed.

At the end of the sixth inning, Cole was at 98 pitches and nine strikeouts.

Two standout players for the Rays in the game were Joey Wendle and Yoshi Tsutsugo. Wendle finished six for 12 with two home runs, while also scoring five runs.

Joey Wendle adds some insurance with a solo home run in the 9th. 4-2 Rays. #RaysUp pic.twitter.com/k3QMwE6piw

Tsutsugo was able to get Tampa Bay in the lead thanks to an RBI double.

Cash emphasized the value Tsutsugo adds to the team.

“Yoshi, he’s been working really hard. Any time you’re working really hard behind the scenes and you get some rewards, it’s gotta be good for your psyche. The team has kind of put their arms around him, and I think everybody’s let him know, ‘You’re a big part of what we’re doing.”

The Tampa Bay Rays are set to face the Kansas City Royals in their next series starting Monday night at 8:10 p.m. Josh Fleming is the starter.

Sara Dastgerdi is a current student at the University of Florida.
Previous Miami Heat Beat Brooklyn Thanks to a Bam Game-Winner
Next Marlins Fall to Giants in Series Finale