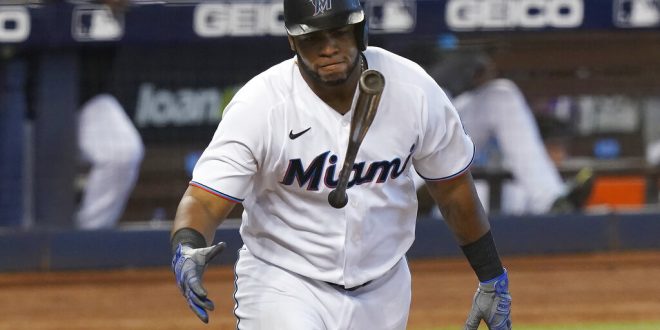 Miami Marlins' Jesus Aguilar (24) throws his bat in the air after hitting a ball to right field during the fourth inning of a baseball game against the San Francisco Giants, Sunday, April 18, 2021, in Miami. (AP Photo/Marta Lavandier)

The Miami Marlins fell to the San Francisco Giants in the last game of a three-game weekend series on Sunday afternoon.

Sunday’s contest saw very few runs put up on the scoreboard. This was in large part due to the solid pitching performances from both San Francisco and Miami.

The Giants saw five different pitchers take the mound on Sunday, including reliever Camilo Doval, who made his major league debut after pitching one inning and striking out two batters.

Camilo Doval showed off some nasty stuff with a pair of strikeouts in a 1-2-3 frame for the @SFGiants. pic.twitter.com/dCuY4fI9ee

Furthermore, relief pitcher Tyler Rodgers picked up his first save of the season for San Francisco, as well.

The game’s only run came in the third inning when Giants’ second baseman Tommy La Stella was able to score off of a single from left fielder Alex Dickerson.

As mentioned already, there wasn’t much offense in Sunday’s game. As a squad, Miami only put up three hits compared to San Francisco, which had six.

Additionally, getting players on base was a problem for the Marlins throughout the game. Miami only managed to have four on base, and two of the four players were called out after trying to steal and stretch a hit into extra bases.

The Marlins also had one player leave the game with an injury, as center fielder Starling Marte tweaked his oblique while batting in the ninth inning.

Next up for Miami is a two-game series against the Baltimore Orioles beginning on Tuesday at 6:40 p.m. Nick Neidert is expected to get the start for the Marlins while Bruce Zimmermann is set to take the mound for the Orioles.

Meanwhile, San Francisco travels to Philadelphia for a three-game series that begins tonight at 7:05 p.m. Kevin Gausman will get the start for the Giants while Chase Anderson will get the nod for the Phillies.