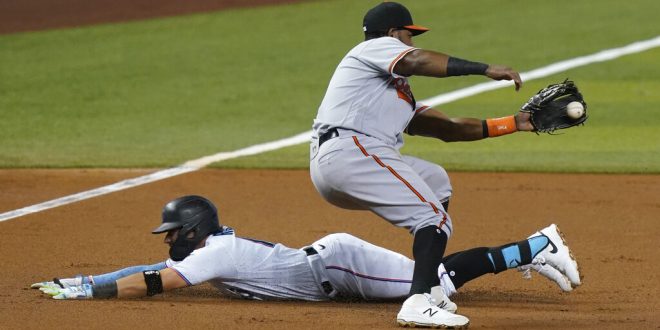 Miami Marlins' Miguel Rojas (19) slides into third base as Baltimore Orioles third baseman Maikel Franco (3) is late with the tag during the first inning of a baseball game, Tuesday, April 20, 2021, in Miami. (AP Photo/Marta Lavandier)

The Miami Marlins and the Baltimore Orioles face off in a two-game series. With the O’s taking the first game Tuesday, the Marlins look to split the series.

It was a run-heavy first inning as four runs were scored. Baltimore scored three, Miami scored one. Unfortunately for the Orioles, outfielder Anthony Santander injured his ankle. In the first, Santander hit a single and injured his ankle. This came when the pitcher attempted to pick him off at first base. Austin Hays, who came in for the injured Santander, Trey Mancini, and DJ Stewart scored for the Orioles, Miguel Rojas scored for the Marlins.

For the Orioles, Hays and Mancini scored another time and Rio Ruiz and Freddy Galvis notched a run. For the Marlins, Rojas scored a second run and went 4-4 on the day, and Corey Dickerson, Chad Wallach, and Lewis Brinson all scored.

Through three weeks, both teams have a player in the top-20 for batting average, Cedric Mullins, Baltimore, .333, 13th in MLB, and Miguel Rojas, Miami, .327, 17th in MLB. Baltimore’s Maikel Franco is tied for 6th in the MLB with 15 RBIs and Miami’s Adam Duvall is tied for 14th with 13 RBIs.

As teams, both are middle of the pack for and team ERA. The Marlins have a big upper hand on the Orioles in batting, though, as they rank 9th in the MLB. The O’s rank 20th.

The Marlins enter today’s game on a two-game losing streak. They lost to the Orioles and were shut out against the Giants on Sunday.

The Miami Marlins are struggling with injuries right now. The team leader in runs scored, Starling Marte is out with a fractured rib. Catcher Jorge Alfaro is day-to-day on an injury. Four starting pitchers for the Marlins are on the injured list.

Fortunately, they are facing the Orioles without Anthony Santander. The 26-year-old outfielder has a 1.000 fielding percentage this season, .983 for his career. He is having a down year so far batting with a .196 average. In the past two years, he has averaged .261.

Jensen Young is a journalism student at the University of Florida. He works as a sports writer for WRUF.com and is the voice of trendings on Wednesday mornings on the WRUF radio station.
@Jensen_Young9
Previous Rays defeat Royals 14-7
Next Lightning Fall to Hurricanes 4-1; Carolina Ties Atop Central Division