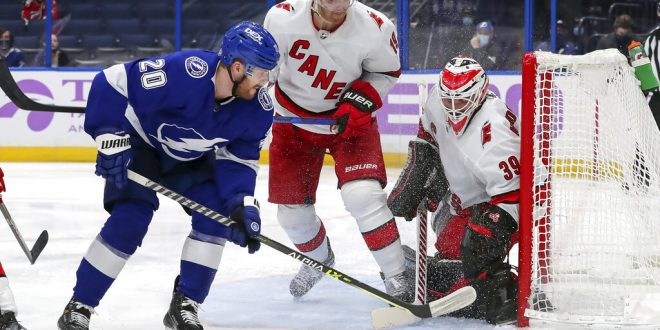 After defeating the Carolina Hurricanes Monday night in overtime, the Hurricanes came for revenge against the Tampa Bay Lightning Tuesday night. A three-goal second period from the Hurricanes (30-10-5) propelled the team over the Lightning (30-14-2) Tuesday 4-1.

The goal gave Neidereitter his 16th on the season. Just 25 seconds later, Staal extended the Carolina lead to 2-0, deflecting a shot from the blue line that skid past Vasilevskiy for the goal. With three minutes left in the period, Lorentz made it 3-0. Morgan Geekie assisted Lorentz allowing him to score his second goal of the season.

Despite the poor second period from the usually dominant Lightning net-minder, Vasilevskiy was able to stop 32 Carolina shots.

Yet, the Lightning answered quickly after the third goal. Brayden Point netted his 20th goal of the season, cutting the Tampa Bay deficit to 3-1. As the second-period horn sounded, the Hurricanes took a two-goal lead into the locker room.

However, the Lightning had no answer for the Hurricanes goaltender, as Alex Nedeljkovic stopped 26 Tampa Bay shots. The Hurricanes were able to add on an empty-net goal, as Jordan Martinook easily scored with 2.2 seconds left. The Carolina victory earned Nedeljkovic his 11th win in the net on the season and the team’s 30th win.

Throughout the game, the Lightning were able to land 34 hits but were outshot by the Hurricanes 27-36.

With just ten games remaining in the NHL regular season, the Lightning see themselves three points back behind the division-leading Hurricanes and Florida Panthers. The Lightning currently hold 62 points, while the Panthers and Hurricanes each have 65 points.

Moreover, the Lightning will be back in action Thursday, taking on the Columbus Blue Jackets at home. The Hurricanes are set to take on the Panthers on the road for two games, as each team will hope to take a solo lead atop the central division.

Previous Marlins and Orioles face off, see injuries
Next Magic Get Bounced Off the Court in a Loss to Hawks