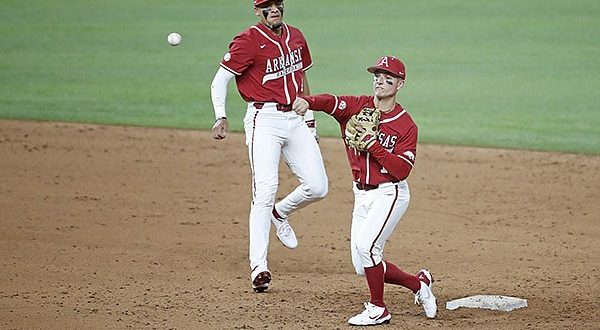 SEC baseball’s dog days are officially upon us.

Conference play for the 14 squads began five weeks ago and concludes in four weeks. Contenders are starting to separate themselves, but there is still time for others to step in.

This weekend could still decide how the rest of the season shakes out as big matchups galore.

The Razorbacks (31-6, 12-4 SEC) started this season with a similar ranking to what they maintained at the conclusion of last season, at No. 8 after finishing No. 10 last season. After an impressive showing at the State Farm College Showdown in Arlington, Texas, to start the season (where UA beat three top 10 teams) the Hogs rose up the rankings to No. 2 and eventually No. 1, where they remain at the moment.

However, Arkansas faces one of its tougher challenges this weekend when it travels to Columbia, South Carolina, to battle the 11th-ranked Gamecocks. The Razorbacks already defeated the ‘Cocks Thursday night and can sweep them Friday as the two teams engage in a doubleheader.

South Carolina (24-11, 10-6 SEC) sits at third in the SEC East. It’s within striking distance of Tennessee and even Vanderbilt but is also only a half-game ahead of Florida. The Gators could pass USC if it gets swept. First pitch Friday flies at 2 p.m. and 7 p.m.

No. 2 Vanderbilt ranks just behind Arkansas in the conference standings and national polls. The Commodores (29-6, 11-4 SEC) commenced the season with a high ranking (N0. 4) and risen up ever since. Vandy actually reached the top spot in the middle of March but lost it after losing two of three to Georgia on April 6 and 8.

This weekend provides an excellent opportunity for the Commodores to make up some ground and catch the Razorbacks if they stumble. No. 4 Mississippi State is the highest-ranked opponent Vanderbilt plays the rest of the season. The No. 4 Bulldogs also begun the season with a top 10 ranking (No. 7) and endured there, with some stumbles. MSU (28-8, 10-5 SEC) approached No. 3 in the rankings, but after a sweep to Arkansas March 26-28, it fell to No. 8.

An 11-1 April assisted the team, but it encounters its toughest test of the month thus far this weekend. First pitch from Nashville is at 8 p.m. Friday and Saturday and 2 p.m. Sunday.

Those two meetings are the only ones to involve two ranked teams, but there are other matchups to keep an eye on. No. 6 Tennessee travels to Texas A&M and No. 12 Ole Miss welcomes in LSU. The Volunteers (30-8, 10-5 SEC) ranked second in the SEC East and the Rebels (27-11, 9-7 SEC) rate third in the SEC West.