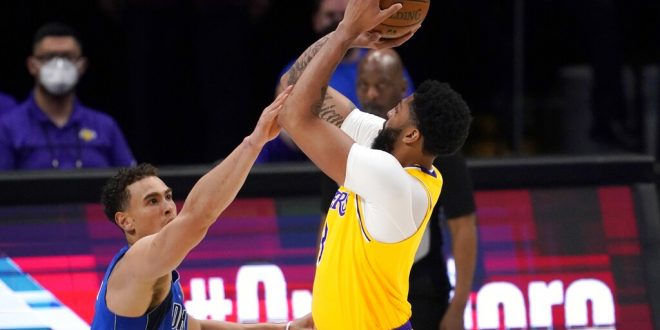 A struggling Los Angeles Lakers team regained one of its stars as Anthony Davis returned to the lineup Thursday night against the Dallas Mavericks. Davis played 17 minutes in his first appearance after a 30-game absence.

On the way … tonight. pic.twitter.com/69LLcY2bg4

Davis’ absence from the court began in mid-February when he was sidelined with an Achilles injury. However, MRI tests did not reveal a rupture of his Achilles tendon.

Further testing then revealed a right calf strain that extended Davis’ time away from the court by four weeks. He wasn’t cleared for full-court activity until nearly 2 months later.

Davis was less than efficient in his return for the Lakers shooting 2/10 from the field. He missed his only 3-point attempt and both attempts from the free-throw line. He finished the game with four points, four rebounds, and one assist, and -11 in the +/- category.

The Lakers fell to the Mavericks 110-115. The Mavs were boosted by a 30-point, nine-rebound, eight assist performances from Luka Doncic, who neared triple-double figures. Kristaps Porzingis was also a major factor, finishing with 19 points and six assists.

The last two months have been less than ideal for a Lakers team that many predicted to dominate the Western Conference. In addition to Davis’ two-month absence, the Lakers have been without superstar Lebron James for over a month. James is not a player that typically misses significant time due to injury, but with a compressed season and more games being played per week, injuries like this may be more commonplace in 2021.

James went down with a right ankle sprain in the Lakers’ March 20 loss against the Atlanta Hawks. There is no official timeline for his injury, but the team believes that it will be weeks before he returns, according to ESPN. Davis spoke about continuing to play without Lebron James and his role as a leader for the team until James returns.

The Lakers have struggled without their two major stars, going 14-17 since Davis was sidelined and 7-10 without James. Once predicted to win the Western Conference, the Lakers now sit in the fifth seed, 9 games back from the Utah Jazz.

One bright spot for the Lakers is the other players that have stepped up in the absence of the two major superstars. Players like Dennis Schroder, Montrezl Harrel, and Kentavious Caldwell-Pope have all played a role in keeping the team afloat when many thought they would fare much worse without their key players.

The Lakers are looking forward to having their complete lineup healthy and back on the floor soon.

The Lakers will face the Mavericks again as they return to action on Saturday night. Lakers head coach Frank Vogel told ESPN that Anthony Davis will still be under a 15-minute time restriction.