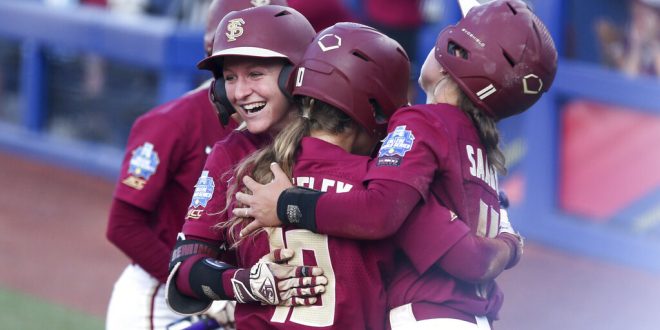 Florida State softball has done the unexpected as they advanced to the championship finals of the 2021 Women’s College World Series. They have matched up with the first-seeded Oklahoma Sooners.

The championship finals is played as best two-out-of-three. The Women’s College World Series is taking place in Oklahoma City, giving the Sooners a slight advantage in the tournament. The attendance for the game was right around 12,000 with about 11,500 of those being fans screaming “Boomer Sooner.” However, the FSU Seminoles were not going to let playing on Oklahoma’s home turf affect them.

Florida State slid past Oklahoma in the opener of the WCWS championship series on Tuesday night in a final score of 8-4. Kalei Harding for Florida State batted last in order but proved herself by going 3-for-4 with four RBIs, including a two-run home run in the third.

The Seminoles were nothing short of aggressive in game. The team had 11 hits, while Oklahoma had eight. In the second inning, Nicole Mendes sped to third base after hitting a pop out but a rifle from right field by Harding gave her an out.

Soon after this play, Harding hit a homer with a two-run double, making the score 4-0 in the fourth inning.

The Sooners trailed behind 7-0 at the bottom of the fourth inning. Back-to-back home runs from Kinzie Hansen and Mendes put Oklahoma on the scoreboard.

In the top of the seventh inning, FSU shortstop Josie Muffley, collided with OU catcher Lynnsie Elam. Muffley has been through many injuries in her career and went through concussion protocol after laying in the dirt for a few moments. The Seminoles were forced to play the rest of the game without Muffley.

The Sooners Refuse to Give Up

Nobody said it’d be easy. We’ll be back tomorrow night.

No team has beaten the Sooners twice this season.

“Failure is not something we believe in. We’ve got to keep fighting. It wasn’t set up for us tonight and that happens. But I believe you’ll see a new team tomorrow and I’m looking forward to it,” Oklahoma coach Patty Gasso said.

Gasso gave the Seminoles their well-earned credit after the game by highlighting their defense, pitching, and especially their offense. Gasso said that Florida State’s offense was absolutely on point and they had aggressive base running.

Will Game Two Be the Last?

The Seminoles and Sooners will play game two of the championship finals of the Women’s College World Series tonight at 7 p.m. A win from Florida State will make them the 2021 National Champions, but if Oklahoma takes game two, a third game will be played tomorrow at 3 p.m.