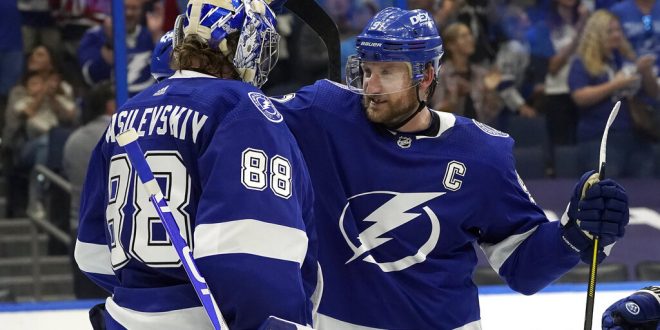 The stage is almost set for round three of the Stanley Cup playoffs. Now, the reigning Stanley Cup Champion Tampa Bay Lightning are one step closer to playing for another title.

The Tampa Bay Lightning are now 8-3 overall in the 2021 postseason after defeating the two teams that finished above them in the Central Division.

They bested the second-place Florida Panthers in Round One in six games. After that, the Lightning eliminated the Central Division-leading Carolina Hurricanes with a 2-0 win Tuesday, thus winning their second-round series 4-1.

The Bolts had an early series lead over the Canes taking Games 1 and 2 with much thanks to Tampa Bay goalie Andrei Vasilevskiy.

The goaltender was at his best in turning away shots in Tuesday night’s contest. He finished with 29 saves to post his third straight shutout.

Vasilevskiy has been especially stingy in postseason play as he stopped 68 of 70 shots through the first two games of their series with Carolina. Following his 29-save shutout Tuesday, he has allowed just two goals in 99 shots in three road games during the series.

The Lightning’s offense is looking just as sharp. Forward Nikita Kucherov is leading the league with 18 points and 13 power play points in just 11 games this postseason. Captain Steven Stamkos is not far behind Kucherov, having earned 13 playoff points.

On to the next one

Tampa Bay will be awaiting the winner of the Boston Bruins-New York Islanders series to play in Round 3.

They could know as soon as Wednesday night who they will be facing in the NHL semifinals.

Will the @NYIslanders advance tonight or do the @NHLBruins force Game 7? #StanleyCup

Tori Edwards is a fourth-year Telecommunications student specializing in News with an outside concentration in Sport Management at the University of Florida. Tori works as an author and reporter for WRUF.com and is the voice of trendings on Wednesday mornings on ESPN 98.1 FM - 850 AM WRUF. You can reach Tori at victoriaedwards@ufl.edu.
@ToriEdwardsNews
Previous MLB Cracking Down on Substances
Next Winner-Take-All Game For Women’s College World Series