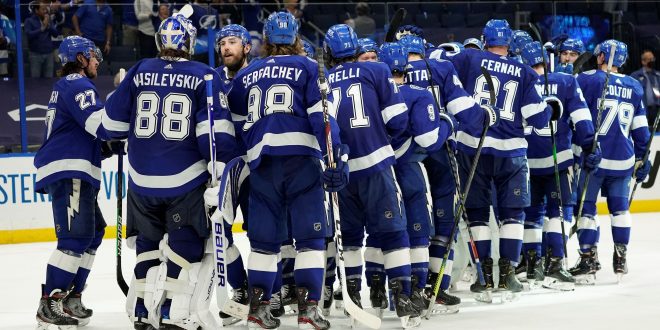 Lightning Shutdown Panthers to Advance to Second Round of Playoffs

The Stanley Cup Champions have found their way to the second round of the 2021 playoffs. In Game 6 on Wednesday night, the Tampa Bay Lightning’s defense dominated. Each defensive line prevented all of the Florida Panthers’ scoring opportunities. The Bolts won with a shutout by Andrei Vasilevskiy, 4-0.

Bolts Goals in Each Period

The second period provided more scoring opportunities for the Panthers. At 1:53, Florida had a power play after the referee called defenseman Ryan McDonagh’s high-sticking penalty. Tampa’s defense was a pin-ball machine as they dodged the puck from Vasilevskiy’s net, preventing a Florida power-play goal. A roughing penalty at 12:53 to Panthers’ center Sam Bennett proved fatal for Florida. Captain Steven Stamkos scored a power-play goal slap shot into Knight’s net at 13:27, his third goal of the series. The Bolts lead advanced, 2-0. Even with a second power-play chance later in the period, the Panthers couldn’t get on the board. The end of the second left the Bolts ahead still 2-0.

The energy on the ice was intense in the third period. Florida’s offense was scrambling to hit the net, but Tampa continued to control the puck. Both center Brayden Point and left-wing Alex Killorn scored their fourth goals of the series late in the third period. Point hit a wrist shot at 14:36 while Killorn tipped in an empty netter at 18:18. The buzzer sounded, and the Lightning stormed the ice celebrating their second-round advance.

The three stars of the game all came from the Lightning. The third star was Pat Maroon with his game-igniting goal, the second star was none other than Stamkos and the big cat Vasilevskiy was the first star. It’s a well-deserved first star for Vasilevskiy after 29 saves and a Game 6 shutout. He is the second goaltender to secure the Stanley Cup with a shutout and his next series with a shutout.

Andrei Vasilevskiy posted a shutout in another series-clinching win as the @TBLightning claimed the first Sunshine State showdown in six games.#NHLStats: https://t.co/CWWGyILkle pic.twitter.com/18SClohvgp

The Bolts showed improvement in Wednesday night’s game. It was their best team game of the series and seemed to have awoken Tampa’s defense. In round two, the Lightning will play the winner of the Carolina Hurricanes – Nashville Predators series. The Hurricanes and Predators play Thursday night in Game 6 of their series, with Carolina leading 3-2.

Kaitlyn Wadulack is a third-year journalism student specializing in sports and media at the University of Florida. You can reach Kaitlyn at k.wadulack@ufl.edu
Previous Gators Baseball Faces Alabama in Round 3 of SEC Tournament
Next SEC Baseball’s Wednesday Round Up