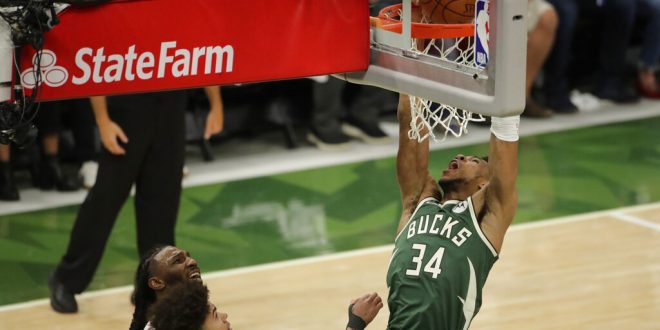 Milwaukee Bucks' Giannis Antetokounmpo (34) dunks during the second half of Game 3 of basketball's NBA Finals against the Phoenix Suns, Sunday, July 11, 2021, in Milwaukee. (AP Photo/Aaron Gash)

As Game 3 of the NBA Final began, the Milwaukee Bucks saw themselves looking up at the Phoenix Suns. As the Bucks trailed 2-0 in the series, Giannis Antetokounmpo had to have another big performance at home to keep title hopes alive. And Giannis did just that with a 41-point game in Game 3.

The Phoenix Suns poor night of shooting kept them out of this game. The Suns shot a whopping 29% from the three-point line in Game 3 as opposed to the Bucks 38.9% from deep. And while Phoenix actually had a better all-around field goal percentage, the three-point shot proved to be the difference-maker.

With Giannis scoring 41, Phoenix struggled to find an answer as their “Big Three” consisting of Deandre Ayton, Chris Paul, and Devin Booker totaled just 47 points combined. Booker was none too pleased with his own shooting, saying he had to “get better looks.”

Phoenix’s brightest star in Game 3 was none other than sharpshooter, Jae Crowder. Crowder posted the best field goal percentage on the team taking all seven shots from deep and nailing six of them.

For Milwaukee, another explosive double-double from Giannis Antetokounmpo helped lead the Bucks to a victory. With 41 points and 13 rebounds, Giannis seemingly took over Game 3. Aside from Giannis’ dominant self, the Bucks’ supporting cast stepped up big time. The Bucks All-Stars, Kris Middleton and Jrue Holiday had 18 and 21 points, respectively.

With Game 3 being the first game of the series to have more than a 10-points differential, the Bucks look to capitalize on their momentum in Game 4. At home for what could be the last time in the series, the Bucks need a big win before going back to Phoenix for Game 5. 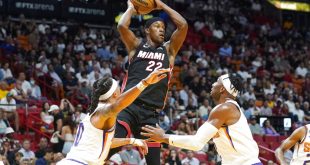 The Miami Heat earned their third straight win Monday night, coming back to defeat the …