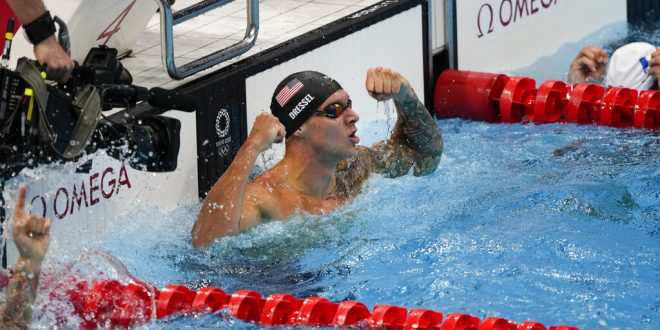 Throughout the 2020 Tokyo Olympic swimming competitions, there’s been one standout name for male swimmers; Caeleb Dressel. Dressel has continued to show out in the Tokyo Olympics. Although, Dressel has mentioned that he is “over swimming” after an exhausting Olympic experience. After earning himself a handful of gold medals, Dressel definitely earned himself a short break.

Get the Gold or Go Home

A marvelous competitor, Dressel has been leading the way for former Gator athletes and American Olympic athletes as a whole. In the last week, Dressel has been responsible for claiming five gold medals.  Dressel’s individual golds have come in the 50m freestyle, 100m freestyle, and 100m butterfly races were all equally impressive. However, Dressel’s impeccable teamwork also earned himself two more gold medals in the 4x100m freestyle and medley relays.

On top of his already dominating Olympic performances, Dressel broke the Olympic record for best 50m freestyle time in his final race. Finishing the 50m freestyle race in 21.07 seconds, Dressel came out of the Olympics with a fifth Gold Medal and a new Olympic record. After an incredible showing in the 2020 Olympics, Dressel stated how he had a tough time enjoying the Olympics. Dressel said, “it’s not the most enjoyable process, but it is worth it.” Having earned five of the seven Gold Medals earned by former Gator athletes, Dressel’s performance is a testament to his years of hard work and dedication to the sport of swimming.