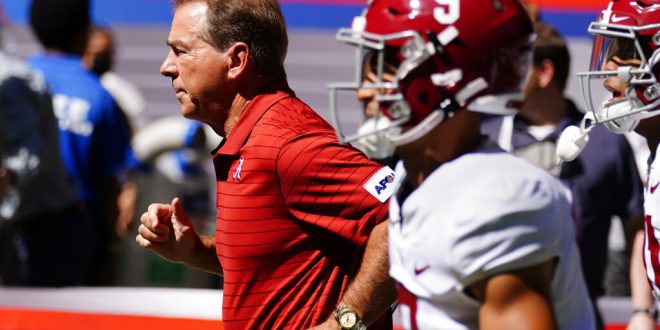 Alabama head coach Nick Saban runs onto the field with his team before the start of an NCAA college football game against Miami, Saturday, Sept. 4, 2021, in Atlanta. (AP Photo/John Bazemore)

Bear vs Tide: Preview of Mercer and Alabama

The Alabama Crimson Tide and Mercer Bears compete in a non-conference matchup this Saturday in the Crimson Tide’s home opener.

After rolling over the Miami Hurricanes 44-13 in a neutral setting, Alabama will be at full strength in regard to fan attendance. The game on Saturday will be the first since the COVID-19 pandemic that Bryant-Denny Stadium will have maximum capacity.

Heisman Trophy contender Bryce Young showcased a stellar outing during week one. The Alabama quarterback threw for 344 yards and completed over 70% of his passes.

Additionally, the Crimson Tide’s suffocating defense made it near impossible for a Canes comeback after a 27-3 hole at half.

Saban says he looks forward to entering a full packed stadium of passionate and enthusiastic fans in their home-opener.

The two programs clashed for the first time in 1940. However, after a long hiatus from the Bears football program from 1941 to 2013, the program was reinstated, immediately winning 10 games in the Pioneer conference.

Meeting only three times in history, recently meeting being in 2017, where the Tides stomped the Bears 56-0, however, Saban says Mercer is an interesting and improved program over the years.

In 2020, a season which was affected by social distancing guidelines due to COVID-19, Mercer split their season between last fall and spring.

Looking Ahead to the Game

Saturday’s matchup will be Alabama’s first non-Power 5 matchup since the Tide defeated Western Carolina in 2019.

Mercer quarterback Carter Peevy was named freshman of the year for the conference. He passed for over 13oo yards and eight touchdowns. Freshman wide receivers  Ty James and Ethan Dirrim were also named All-Freshman in the conference.

While it may be fairly understandable for Alabama fans to overlook the Bears and have their eyes set on the Gators the following week, Mercer does have the ability to be explosive offensively.

A 69-0 route to Point broke school records for the Bears, and head coach Drew Cronic said it is always great to shut a team out.

It doesn’t look like the Tide didn’t take Canes blowout win for granted. Saban says there is a lot for his players to learn from the season opener, and hopes to carry that momentum at home.

However, with over 500 yards rushing and seven touchdowns in their last outing, Cronic and the Bears say they are up for the challenge. Cronic says it is a great opportunity for the program to compete against one of college football’s best.

Alabama is expected to be heavy favorites when the two teams play on Saturday, Sept. 11.

With the college football season quickly approaching its end, No. 8 Alabama is looking for …