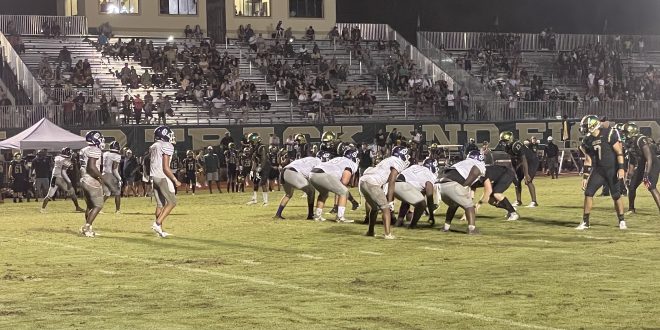 Gainesville’s Defense Leads them to Victory Over Trinity Catholic

The Gainesville Hurricanes (2-1) traveled to the Trinity Catholic Celtics (0-2) Friday night and left with a 7-3 victory.

Offensive Woes for Both Teams

The first quarter was uneventful for both teams when it came to offense. This continued into the second quarter until the Hurricane’s offense found themselves in a positive spot late in the quarter.

The Hurricane’s defense had just forced an interception on the Celtic’s own 11-yard line. They immediately turned this into points as they scored an 11-yard touchdown on the ground. This touchdown would give them a 7-3 lead over Trinity Catholic with 2:28 left in the second quarter.

The defense was not done there, they would force one more interception in the quarter putting the offense in a favorable spot. With under 30 seconds left in the quarter, the defense would intercept the pass on their side of the field and return it all the way near the Celtic’s 20-yard line. However, with time against the Hurricanes they weren’t able to score any points before the half.

Gainesville would go into halftime with a 7-3 lead over Trinity Catholic.

Gainesville head coach Dock Pollard gave his thoughts on his team’s offense and its struggles.

Second Half Dominated by Defense

The Celtics and Hurricane defenses were truly the deciders of this game. Neither one willing to budge and give the opposing team’s offense a chance to grab momentum.

Coming out of halftime the Celtics would receive the ball. While they had hopes of finally score a touchdown, the Hurricanes had no plan on letting them score. Their first drive of the third quarter would result in no points and a punt, giving the ball back to Gainesville. The same went for the Hurricanes as they could not forge a successful drive against the Celtic’s defense on their first possession.

After passing the halfway mark in the third quarter, the Celtics started to march down the field and posing a threat to score. After a couple of successful running plays and a huge gain from a quarterback scramble, they found themselves nearing the red zone and potentially thinking about scoring. Gainesville’s defense had other thoughts. Once again, the Hurricane’s defense erased that idea by coming up with another stop and this time on fourth down. This would allow them to retain the lead going into the fourth.

After little-to-no offense throughout the fourth, the defense had one last task. Get a stop. Late in the fourth quarter, the Trinity Catholic offense started to move the ball down the field and inching closer and closer to Gainesville’s end zone. With under two minutes left in the game the defense only had to not give up a touchdown. That is easier said than done.

Fourth and four with only 1:05 left remaining on the clock, Trinity Catholic would be forced to go for it. On fourth down Trinity Catholic would try to run the ball up the middle and would come just short of the first down, which resulted in the Gainesville fans and players screaming with joy. This fourth-down stop allowed the Hurricanes to run out the clock and win the game.

Defense Continues to Impress and Show their Identity

Coach Pollard said last week their defense was their calling card. He went on to say the same thing after tonight’s game.

“The defense is our calling card. They got to carry us until we can get it truly going on offense. We expect to not give up any points.”

Overall, the Gainesville Hurricane’s defense stayed true to their identity and was the main reason they were able to win tonight’s game over the Trinity Catholic Celtics with a final score of 7-3.