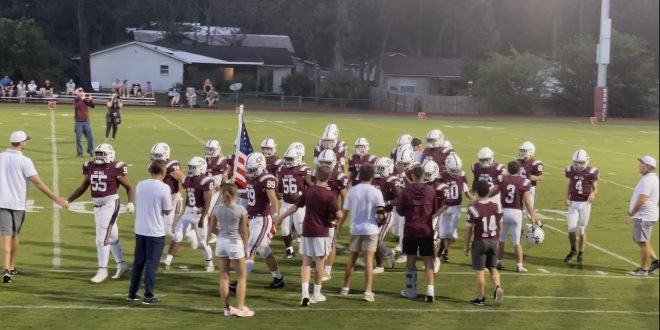 After a slight rain delay, Oak Hall fans lined up outside of their stadium eager to watch the Eagles play their first home game of the season. This game meant a little more to the Eagles, as they were honoring two of their coaches that had passed away. Additionally, they held a moment of silence and waved the American flag for the 20th anniversary of the 9/11 attacks.

Oak Hall Controls The 1st Half

The Oak Hall Eagles began the game in a dominant fashion. They were getting first down after first down, and their offense was extremely fluid. After being held to a 4th and 1 right at the goal line, Captain Dylan Provencher ran the ball up the middle for their first touchdown. The Eagles would successfully attempt a two-point conversion to take the lead 8-0. On the defensive end, Oak Hall started off great. The Eagles forced a turnover on downs during Seven Rivers Christian’s first offensive drive.

With about 9:30 left in the 2nd quarter, Quarterback Dakota Brower throws an excellent pass on 4th down to score for the Eagles. Dakotah would then run it up the middle for the two-point conversion and give his Eagles a 16-0 lead. However, Seven Rivers Christian bounced back with a long pass up the middle of the field. They finished their drive with a 30-yard deep pass to the end zone. The Warriors elected to go for the two-point conversion and succeeded. The score heading into the half was 16-8 Eagles.

2nd Half Comes Down To The Final Play

Although being down eight points at the half, Seven Rivers Christian came out motivated and opened up the 3rd quarter with an excellent pass up the middle for a long touchdown. They converted a two-point conversion and tied the game 16-16 with 10:17 remaining in the 3rd. The rest of the 3rd quarter contained defensive stops for both teams, as neither scored for the rest of its duration.

The 4th quarter began and Oak hall was in a good position to score. They ultimately failed to score and the ball went back to Seven Rivers Christian. Oak hall played great defense and forced a fumble that they were able to recover. The Eagles carried their defense’s momentum and turned the fumble recovery into a touchdown with 7:03 remaining in the 4th. They took the lead 22-16 after missing the 2 point conversion.

Oak Hall kicked the ball off and out of nowhere, Seven Rivers Christian returns the kick all the way to the endzone for a touchdown to take the lead 23-22. This swayed the momentum of the game in favor of the Warriors. However, Oak Hall used the rest of the quarter to drive the ball down the field. They drained the clock down to four seconds and scored a clutch touchdown to win the game 30-23.

The Oak Hall Eagles were put to the test and had to showcase their impressive late-game perseverance. The Eagles remain undefeated and improve their record to 3-0. They travel to Faith Christian High School in Orlando next Friday to play the undefeated Lions in an important district matchup.