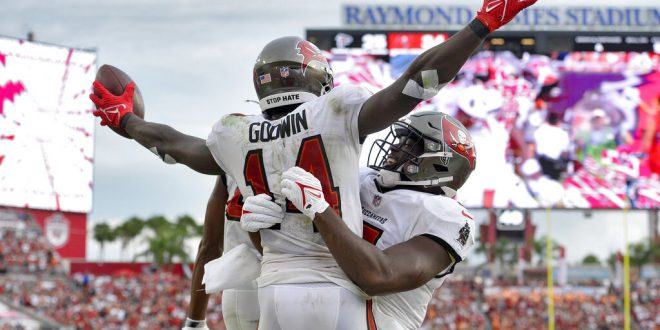 Tampa Bay Buccaneers wide receiver Chris Godwin (14) celebrates with teammates after his touchdown against the Atlanta Falcons during the second half of an NFL football game Sunday, Sept. 19, 2021, in Tampa, Fla. (AP Photo/Jason Behnken)

The vibes are immaculate pic.twitter.com/HmUlOFDLKi

On their first drive, the Bucs moved the ball 75-yards down field with ease. Brady threw a 20-yard pass to tight end Rob Gronkowski who took it to the end zone for the Bucs first touchdown at 12:22. Atlanta prevented Tampa from a second scoring run in the first after linebacker Dante Fowler sacked Brady at the Falcons 29-yard line. The Bucs quarterback fumbled the ball, and Falcons’ linebacker Mykal Walker swiftly took the ball. However, the Bucs defense prevented any chance of the Falcons tying up the score, ending the first 7-0 Tampa.

It was a back-and-forth scoring run for both teams in the second quarter. A one-yard pass from Brady to Gronkowski put Tampa up 14-0 early, but the Falcons were quick to respond. The Falcons took the ball 66 yards in five plays to score their first touchdown by running back Cordarrelle Patterson.  The 10-yard-scoring run put the Falcons just one touchdown behind the Bucs at 11:48.

Mike Evans was another offensive weapon for Tampa Bay. The wide receiver scooped in a three-yard pass from Brady to edge the Bucs lead 21-7 with 43 seconds left before the half. Falcons quarterback Matt Ryan pushed through, however, and got Atlanta within field-goal range. Atlanta kicker Younghoe Koo earned the Falcons three points with a 36-yard field goal, ending the half 21-10 Bucs.

At halftime, fans at Raymond James Stadium watched as former Bucs defensive coordinator Monte Kiffin was inducted into the team’s Ring of Honor. Kiffin led the Bucs defense for 13 seasons from 1996 to 2008 and is credited as the mastermind of the Tampa-2 scheme.

The third quarter gave hope to Atlanta fans. Even after a second Evans touchdown at 12:43, Ryan and the Falcons were able to close the scoring deficit within three points after consecutive touchdowns by wide receiver Calvin Ridley and Patterson. Ryan secured the two-point conversion after Patterson scored, ending the third 28-25 Bucs.

Safety Mike Edwards was key in finalizing Tampa’s fate. After Brady threw to wide receiver Chris Godwin to up the Bucs lead 35-25, Edwards saw through Atlanta’s offense and scored on two pick-6 returns of 31-yards and 15-yards respectively toward the end of the fourth. There was no way for Atlanta to recover, and the game concluded with a 48-25 Tampa win.

Brady threw for 276 yards with five touchdowns Sunday to give him nine total scores in just two games. Brady said the defense made huge plays in the fourth quarter with good team effort overall.

Tampa travels to the West Coast to face the LA Rams Sunday in the third week of the regular season.

Kaitlyn Wadulack is a third-year journalism student specializing in sports and media at the University of Florida. You can reach Kaitlyn at k.wadulack@ufl.edu
Previous Florida Volleyball Coasts over Chanticleers
Next Gators Soccer Draws Against North Florida in 2OT