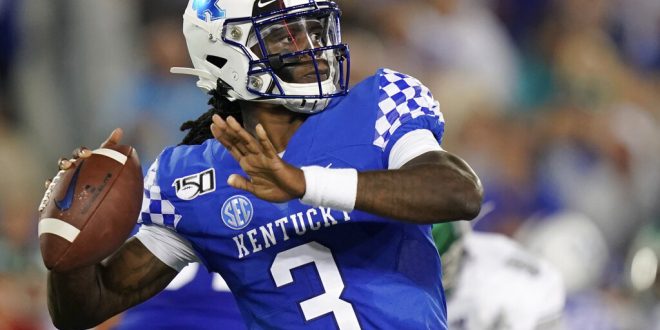 FILE - In this Sept. 7, 2019, file photo, Kentucky quarterback Terry Wilson (3) throws the ball during the first half of an NCAA college football game againstr Eastern Michigan, in Lexington, Ky. Terry Wilson has waited for football's return even longer than most of his Southeastern Conference brethren. No. 23 Kentucky's quarterback will take the field again Saturday, Sept. 26, 2020, at No. 8 Auburn, returning from a knee injury that cost him almost all of last season. His Tigers' counterpart in the SEC's opening weekend is Bo Nix, coming off a strong freshman season.(AP Photo/Bryan Woolston, File)

The Gamecocks are coming off a 40-13 loss after facing Georgia last week. With South Carolina quarterback Luke Doty playing for the first time this season, he was able to complete a pass to Josh Vann for a 36-yard touchdown. Additionally, South Carolina gave up three sacks and two turnovers against a fierce Bulldog’s defense, leading to Georgia touchdowns.

South Carolina head coach Shane Beamer recognized how tough it is to compete with the Georgia defense.

After a week of practice, Beamer want to improve the team’s 1 v 1 battles, knowing Kentucky’s defense will be tough to beat.

The Gamecocks will look to perform well under the lights of Williams-Brice Stadium and bounce back from a tough Georgia loss.

In their first road game of the year, the Wildcats look to keep the momentum going after their win last weekend over University of Tennessee at Chattanooga.

Against Chattanooga, Wildcats quarterback Will Levis passed for 246 years and two touchdowns to skim by 28-23. With a 21-16 lead in the fourth quarter, Tyrell Ajian intercepted a Chattanooga pass at Kentucky’s five-yard line. Also, the Wildcats’ 95-yard return led to a game-clinching touchdown that held off Chattanooga.

After playing their first three weeks at home, Kentucky will have to face a loud South Carolina crowd.

Looking at their matchup against the Gamecocks, Kentucky head coach Mark Stoops will look to improve the team’s offense.

The Gamecocks and Wildcats are no strangers. In the past, they have faced off 32 times with South Carolina winning 18. With that being said, Kentucky went on a five-game win streak from 2014 to 2018. Last year, Kentucky came out on top 41-18 over the Gamecocks.