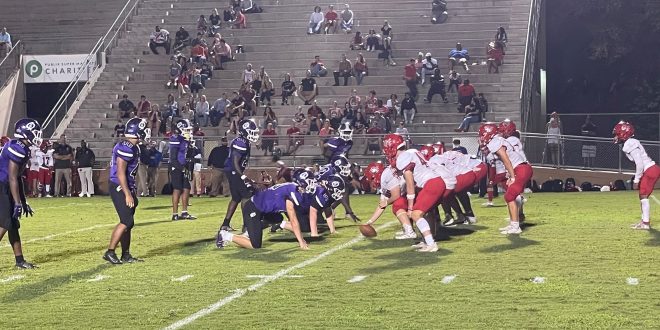 The Gainesville Hurricanes (4-1) had a strong performance against the Santa Fe Raiders (0-4) at Citizen Field on Friday night as they extended their win streak to four in a row with a 49-14 win.

Hurricane’s Offense Leads the Way in the First Half

The Hurricane’s offense came to play as they looked to build off last week’s performance. Their first touchdown came from their opening possession. Hurricane’s halfback John Cooper would supply them with an early 7-0 lead over the Raiders after a nice rushing touchdown. They easily were knifing through the Raider defense on the ground on this drive. The Hurricane’s offense was not done there as they punched in another rushing touchdown on their next possession. This time it was from all-around player Mario Mitchell. This gave Gainesville a lead of 14-0 over Santa Fe.

After a stout defensive possession from the Hurricanes, their offense came knocking on the door looking to score another touchdown one more time in the first quarter. The Hurricanes offense started on the Raiders side of the field to begin their third drive.  They would be able to find their way into the end zone one more time in this quarter from a nice pass from quarterback Shooby Coleman to wide receiver Khamari Frazier giving them a 21-0 lead.

Right after the turnover, @Canesville1900 is able to score through the air pushing the lead to 21-0.

Early in the second quarter the Hurricanes finally had been stopped on offense after a flag on fourth down moving them out of field goal range. However, the Raiders would gift them another shot at scoring when their special teams unit got called for roughing the punter. Gainesville’s offense immediately turned this good fortune into points. Hurricane halfback John Cooper, once again, wiggled his way into the end zone on the first play after the penalty. This would put Gainesville up 28-0 over Santa Fe early in the second.

One small hiccup for the defense came in the second quarter. After a 35-yard pass from the Santa Fe quarterback and multiple runs from the halfback netting positive yards, the Raiders scored a touchdown. After this touchdown, Santa Fe was on the scoreboard, 28-7. The Raiders would go for an onside kick immediately after this score and recover it, but nothing would come from it.

Once the Hurricane’s offense was back on the field they wasted no time putting the ball in the end zone. One play was all it took for halfback John Cooper as he finessed his way around the defense for a 93-yard rushing touchdown and pushing their lead to 35-7. This was his third of the night.

The Hurricanes had one final possession in this half, which netted them one final touchdown to end the half. Impressive pocket movement from quarterback Shooby Coleman allowed him to find receiver Brent King for a touchdown.

Great movement from Shooby Coleman and he was able to find an open receiver for a @Canesville1900 touchdown.

Gainesville would end the half with a 42-7 lead over Santa Fe.

Defenses Strong in the Second Half

The second half seemed to go by quickly with fewer highlight plays happening from either team. The only drive in the third quarter that would result in points for both teams was Santa Fe’s first offensive possession. The Raiders would come out of half and recover another onside kick, which led to their grueling drive of eight minutes. At the end of this drive, they would go for it on fourth down on the one. They ran a quarterback sneak and were able to make it across the line for a touchdown making the score 42-14 in favor of the Hurricanes. The Hurricane’s defense, outside of this one score in the second half, kept the Raiders offense in check.

One last flow of eye-catching plays was near the end of the fourth. With around four minutes left, Mario Mitchell intercepted a wild pass from the Raider’s quarterback and returned it to the Raider’s nine-yard line. The Hurricanes made the most of this turnover with a passing touchdown from Shooby Coleman finding receiver Brent King again.

This time WR Brent King scores for @Canesville1900 extending the lead to 49-14 over the @SFHS_Raiders.

Gainesville Hurricanes head coach Dock Pollard ended the night emphasizing how proud he is of his offense.

The next game for the Gainesville Hurricanes is not until October 7th when they will face the Buchholz Bobcats. Coach Pollard stated that his team is getting better from week to week and that he needs his team to have confidence going into their next game.